A Dog and his Bone

A number of years ago I wrote a small piece for FamilyFun magazine on how to make a dog bone wreath. It was pretty simple – cover a wreath shaped piece of cardboard in foil, tie on dog bones and voila a simple pet present. The photo stylist got a bit wild and ended up adding real greenery to the wreath as well as tying on dog toys which both made it more complicated and more expensive. To me the original idea seemed the easiest and best and the one I go back to again and again.

There are four ways to do this project. The first it to buy pre-made dog bones and cover cardboard wreath shapes with foil which you then tie the bones onto. The second and third options are to make your own dog bones, which gives them a home-made appeal, then either tie medium size bones onto the foil covered wreaths or slip larger bones into those tiny stockings you can buy at craft stores around the holidays (I tend to buy as many as I can find after Christmas for the following year when they go on sale in January). The fourth possibility is to decorate a real wreath with dog bones, though that can get pricy and prickly (depending on the evergreens you use).

For years my kids went for the second and third options. They would mix up homemade dog bones, tie them with saved ribbons from Christmases past onto foil-covered cardboard wreaths or slip the bones into miniature stockings and sell them to our neighbors, almost all of whom either have a dog or two or know someone who owns one. Isabelle and Russell were smart, taking scraps they baked as “samples” to each house so the canine inhabitants could taste test the bones before their owners pulled out their wallets. 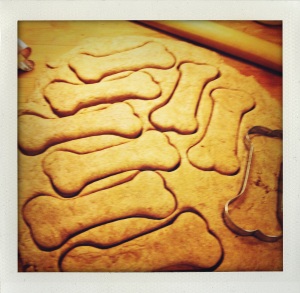 Cutting out home made dog bones

We make these with bacon fat which we save each time we fry up some bacon. It seems to last indefinitely in the freezer, though if you don’t eat bacon you can always substitute vegetable oil, but I think part of their appeal to canines is the bacon fat. Our family eats nitrate free bacon, which is another selling point to our neighbors who are picky about what their dogs consume, even if their dogs couldn’t care less. 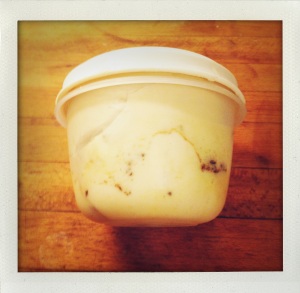 This year I’m passing on the recipe to my brother’s kids who can carry on the tradition. My two nephews have decided their little six-year-old sister will be their “secret weapon,” the charmer whom no one will be able to say no to. Personally I think she might be the brains behind the whole operation after I overheard her tell her dad, “We need to make sure the Smith’s dog gets one.” My brother hesitated, I’m sure thinking Great-we don’t have a dog and we’ll end up buying the entire inventory when his daughter concluded, “Of course they’ll have to pay for it.”

Preheat oven to 350ºF. Mix flour and crumbled beef bouillon with egg and water. Add the bacon fat or vegetable oil and need. Roll out to 1/2″ thickness and cut with dog bone shaped cookie cutters. Place on parchment or foil covered cookie pans and bake 23-30 minutes depending on size. Flip the bones over half way through baking and bake an additional 22-30 minutes. Cool and then use to decorate wreaths or stockings.

Note: These dog bones have no preservatives and so will not last much longer than a few weeks. Our dog Oliver loves these so much he will eat them as quickly as we will give them to him so it has never been a problem for us, but don’t plan on keeping them the same amount of time you’d keep store-bought dog bones. 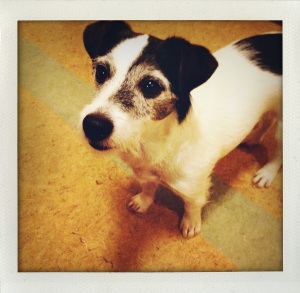 One response to “A Dog and his Bone”