Can she make a Crêpe?

I loved the movie Julie & Julia, well I loved the half of it featuring Meryl Streep as Julia Child. The other half grated, as did the book the movie was named after. One of the things that really tweaked the cook in me was Julie Powell’s inability to consistently make a crêpe. She’s right, the first one can sometimes be a bit wonky, but after that they should sail along. Batter in, tilt the pan, cook till brown and speckled then flip. Next.  In and out of the pan, being eaten by the hungry hoards in your kitchen who line up at the first sizzle of the crêpe pan. However, Powell is hopeless with crêpes, and not only is she hopeless she whines about it. It made me want to slap her and inquire about her cooking IQ. Julia Child is a good teacher, I remember learning to make Chicken Kiev from watching Julia demo it on tv. When I was 13! We’re talking boning a chicken breast, making the herbed butter, the whole 9 yards. So don’t tell me crêpes are too hard because they’re not. Sorry for the rant, just had to get that off my chest. 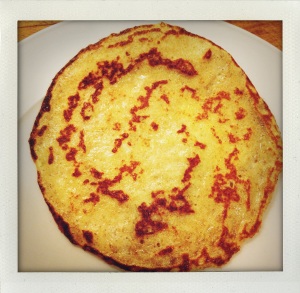 My earliest memory of eating crêpes was I first visited Paris. You could buy crêpes on the streets of Paris much the same way you can buy hot dogs and pretzels on the streets of New York. The vendors always made their crêpes with little paddles that smoothed the batter into a giant crêpe. Filled with Apricot jam, Nutella, Sugar and Lemon it was hard to choose what to have them put inside before they folded it up and wrapped it so you could stroll and munch. I don’t make my crêpes as large so I figure I don’t have to decide on one single filling I can have one small crêpe of each flavor! 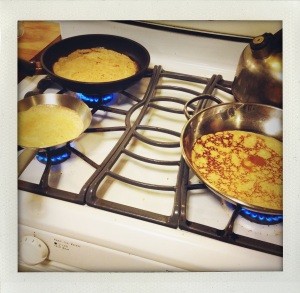 Three at a time

Whisk together milk, water, and eggs. I like to do this in a pitcher so later I can just pour the batter into the pan. Whisk in flours, salt and sugar if using. Then whisk in melted butter. The batter then needs to rest for a few hours.

I experimented with several different pans to see if one worked better than another and found that the plain metal ones browned better than the non-stick pan, however all worked. The trick is to have your pan medium hot before you pour your first crêpe and swirl a small pat of butter in to get things going. Then it is simply pour, tilt the pan to swirl the batter evenly along the bottom, wait till the first side is browned and flip. I like to flip with my fingers, though that is too hot for some people. A flexible spatula works well if your fingers aren’t singe-proof. I find that after the first crêpe is cooked I don’t need to keep re-buttering the pan because I never let it cool down. If you were to shut off the burner to eat a crêpe or two you might want to add a dab more after you reheated the pan before making more crêpes.

Once your crêpe is cooked it’s time to decide what to put inside. Jam is always a good choice. As is the classic French combination of sugar with a squeeze of lemon juice. A smear of Nutella and sliced bananas is divine because the warm crêpe melts the Nutella slightly into a chocolate-hazelnut ooze. Likewise honey spreads itself when drizzled over a warm crêpe. Fresh fruit thinly sliced is good. I’ll occasionally saute some apples with a little cinnamon sugar. The choices are only limited by what’s in your kitchen. Once you’ve chosen a filling it’s simply a matter of rolling up  your crêpe and eating. 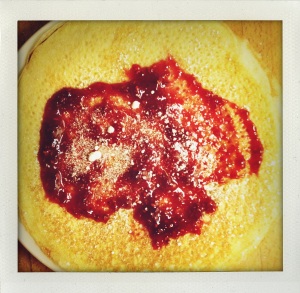 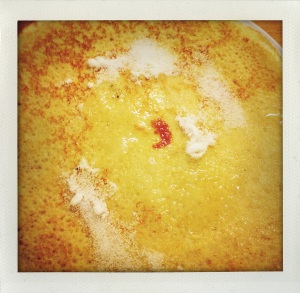 Sugar and a squeeze of lemon juice 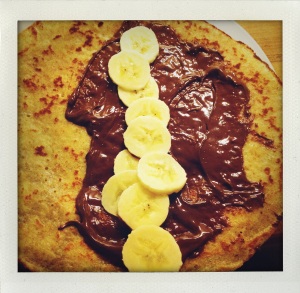 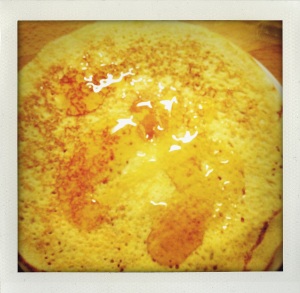 So what’s your favorite filling for a crêpe?

3 responses to “Can she make a Crêpe?”