I know, I know, I’m only a month and a half into this blog and already I’m behind. It’s not that I didn’t have a recipe. Or photographs. It’s just that things came up, or rather things went down. As in R. crashed down the ski slopes at Berkshire East last week. Then he was taken down the hill in a sled with the ski patrol (love you guys–thanks for the rescue!!) And after that he went down the road on his back in an ambulance to Baystate Hospital, which technically isn’t down it’s  more east, but it sure as heck ain’t up. Then down on a table to have his leg x-rayed. Not fun as you can see.

So while I had an amazing recipe planned other stuff happened and I’m a wee bit behind.

Just like stuff happened the first time I made risotto. As most of you know I’ve  been paid to cook since I was thirteen. Which means I have spent a number of years in front of a stove. Despite that I didn’t learn to make risotto until I was over thirty and disclosed that dirty little cooking deficiency to one of my best friends, mentor and R.’s godfather Rick Ellis. He was shocked and immediately decided to remedy my ignorance.

At the time Rick and his partner Thomas had an apartment in Greenwich Village near Washington Square Park. As a food stylist Rick had (and still has) an amazingly well stocked pantry. He had me grab a bag of Italian risotto rice, along with a bottle of white wine, some shallots, an egg size nob of unsalted butter plus some fabulous dried mushrooms from Italy.

He had me carefully mince the shallots, as the mushrooms were reconstituting in hot water. We slowly sautéed the shallots in the butter and then poured the arborio rice into the translucent shallots only to watch the rice and shallots begin to  twitch and writhe. Unwittingly we’d added a lot of protein to our risotto by using a bag of arborio infested with flour moths. Since no one really wanted bugs for dinner we scrapped the whole thing into the garbage and started again.

The second time around there were no shallots so we used onions. With the clock ticking and our knives flying we chopped more than diced the onions. Before adding the second bag of arborio rice we inspected it carefully for any surreptitious movement and found none. I seem to remember using one glass of wine for the risotto and two for Rick and myself as we whipped up risotto #2. The end result was delicious–rich with porcini mushrooms, butter, onions, wine and chicken stock served with some fresh asparagus and garlic toast.

I’ve made many a risotto since and I’ve learned that risotto can be made tenderly with love and attention or it can be made under a little bit of pressure and either way as long as you use the proper ingredients and stir often enough, the risotto always turns out deliciously!

As devine as Rick’s mushroom risotto with asparagus was mushrooms are a hard sell in my house. Instead I’ve come up with a butternut squash risotto adapted from Marian Morash’s Victory Garden Fish and Vegetable Cookbook. Technique-wise I suggest you read Jamie Oliver’s return of the risotto from his book The Naked Chef Takes Off if you can’t have Rick or me standing at your elbow.

1 medium large onion, peeled and minced (or chopped if you’re in a hurry)

1/2 – one bunch of swiss chard, chopped into chiffonade or asparagus if they are in season 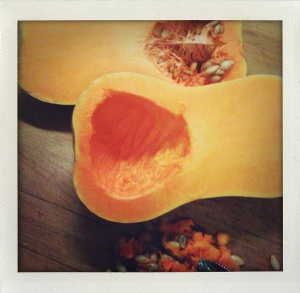 Here in New England you can buy butternut squash peeled, seeded and chopped. I confess that I have never bought it like that, though I do eye it every time I walk by it in the produce section. Instead I either crank the oven to 375ºF , slice the butternut in half, seed it with a grapefruit spoon and then plunk it down on a jelly roll pan with some water for 45 minutes or until soft or I slice and dice it myself. If I’m going to slice and dice I cut rings of squash and then peel each ring, chop and throw it into the stock (for risotto) or a steamer (for yummy creamed butternut squash with butter and maple syrup). 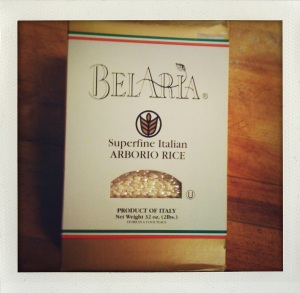 Once you have the squash under way start on the risotto. Saute the onions in the olive oil and butter. Add the garlic and arborio rice and saute until the rice starts to become slightly translucent and a little dry. Then dump in the glass of wine. Stir until the rice sucks it up. Then switch over to  the chicken stock. A couple of ladelfulls of stock, some stirring and scraping of the bottom, then wait until the rice absorbs the liquid. I add the saffron near the beginning of this process since it then flavors the whole dish. 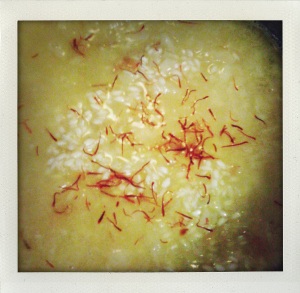 So it’s liquid, stir, absorb, repeat. For people who like to poke at things on the stove this is the perfect recipe. Once the rice has reached the al dente stage I turn off the heat, throw in the swiss chard and shrimp and clamp a lid on the pot. After a few minutes I lift the lid, stir a bit and shut it up again. The residual heat cooks the swiss chard and shrimp. When the shrimp is cooked serve in bowls with a generous helping of Parmigiano Reggiano. 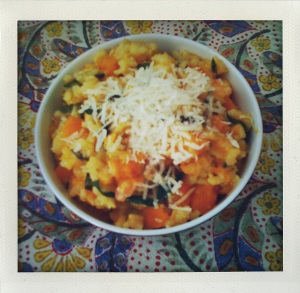