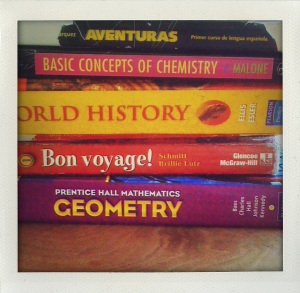 It is officially summer now. My kids attended the graduation ceremony at the Academy of Charlemont on Saturday so for our family it’s summertime! Graduation was the fun part–a party and celebration, saying goodbye to their text books and teachers for nearly three months while making plans with friends for get-togethers over the summer. In order to get to the celebratory part though they had to  make it through exam week.

I am so glad I’m not in school, not because of the things I don’t learn by not being in a classroom, but because not being in school means I don’t have to take exams. They’re a brutal yet necessary way for teachers to measure what you’ve learned. I helped both kids where I could with the studying part, which mostly centered around French vocab (I would say the word in english and they would tell me the French version). They were on their own for their other subjects because really what do I remember about chemistry, geometry or world history? My other contribution to their (hopeful) successes was to make them a hearty breakfast at the start of each exam day.

Isabelle already eats an amazing breakfast each morning having taken to heart the old adage, “It’s the most important meal of the day.” So it was three more days of omelets stuffed with veggies served with a piece of dry whole wheat toast for her. Russell was a little more challenging. Sometimes he’ll have what I would call a proper breakfast (some protein, fruit, and a bit of whole wheat something), while other days I’m lucky to get him to eat a single piece of toast with jam. So for exam week I made an old favorite family recipe which the kids have been eating since they were toddlers–Silver Dollar Pancakes.

The genus of this recipe is from my friends in the Nicoll clan. A pamphlet that came with my potato masher included a recipe for “Dad’s Sunday Morning Pancakes”. This recipe was adapted from an old issue of Gourmet which every member of that family subscribed to until the magazine’s untimely demise. I’ve seen variations of this same recipe in the Fannie Farmer Baking Book.

What I love about these particular pancakes is that they don’t make you feel like you’ve eaten an expanding brick after you push away from the table, which is my main complaint when I eat other pancakes (which also explains why I’m more of a waffle person than a pancake person, but more on that later). These pancakes are light and delicious with either maple syrup or fruit preserves and a sprinkle of powdered sugar on top. Fresh fruit works well with them too, more as a topping put on before serving as opposed to an ingredient cooked into the pancakes while they’re in the pan. These pancakes get an A+ at exam time is because they’re not only full of protein, calcium and fiber, but they’re so good nobody knows it.

1 cup cottage cheese (I use the no salt version)

I melt the butter in the pan or griddle I’ll be cooking the pancakes in so that I accomplish three tasks in one–melting the butter plus preheating and greasing the cooking vesicle. Then it’s just a matter of combining the ingredients. You can use a potato masher to squish everything together or throw it all in a food processor (I have a mini one which does an excellent job) and zap it till mostly smooth. The trick to getting really picky eaters not to ask, “Eeww, what is this?” is to make the cottage cheese curds so small they are rendered invisible to the naked eye. Once you’ve got your batter mixed simply spoon silver dollar size dollops onto the heated pan or griddle and cook on medium low heat until the pancake looks slightly dry at the edges. Note–these aren’t like traditional pancakes that have a lot of bubbles on the uncooked side prior to flipping, sometimes they have a few and sometimes then have none. Flip and cook for another few minutes until golden.

To serve top with maple syrup and cut up fruit or a few spoonfuls of fruit preserves and a sprinkle of powdered sugar.

My friend Jim has assured me that it’s ok to lick your plate when you’ve eaten all your pancakes yet a small puddle of maple syrup remains. While I don’t normally think of Jim as my go-to guy when I have food related etiquette questions, I have to say I agree with him in this particular instance due to the astronomical price of real maple syrup. The exception of course is when my parents come for breakfast. Then I try to make enough pancakes to sop up all the syrup on everyone’s plate.