Last Saturday I got up at 6 am to help pack the car and take Isabelle back to college. The start of year number two was completely different than it was for year number one. For starters it was just the two of us. No whole-family entourage like we’d done for her freshman year. Just two girls, a loaded Prius, and a couple of energy bars in case we felt peckish between Whately and West Haven. Even the weather was different –

These screen shots from my radar app show the difference from one year to the next. Despite the lack of precipitation, for which we were very grateful, there was still some pretty intense cloud action to gawk at as we zoomed south on 91. 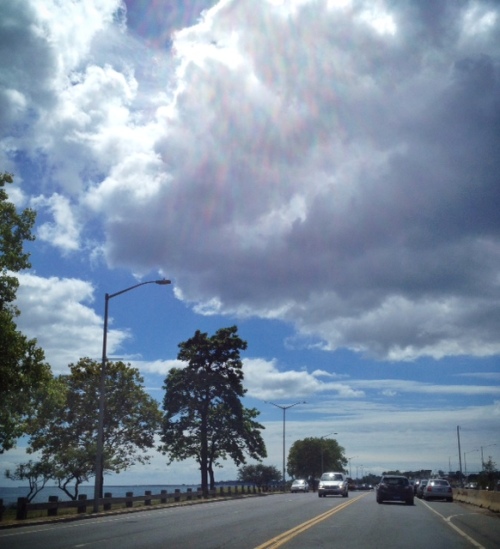 Instead of the cutie little house she was in last year she’s in a big dorm, smack dab in the middle of campus. There are pros and cons. One of the pros was we could load all her stuff into a gigantic orange crate on wheels then ride it up the elevator to her room in two trips. Yeah for giant orange crates and elevators!

One of the cons of said elevators is that she won’t be able to use them on ROTC days since there is a regulation which states that when cadets are in uniform they may not use the elevators – they have to use stairs. I think the government just wants them to get a little bit more exercise. Of course for my kid that is just fine and dandy since she loves to work out. When she was describing her dorm to us after the housing lottery this past spring the main pro of this dorm (in her eyes) is the fact that the gym is right behind it – literally a hop, two skips and a jump, which makes her very happy. After I left there were some texts saying she’d been to the gym, had gone out to dinner with friends, but somehow hadn’t quite unpacked her room (this via snapchat) –

I’m sure being on the quad will be noisy, but she went prepared with earplugs plus we picked up a box fan for the window which should at least provide some white noise to counteract the boisterous revelers who decided to skip the gym. And let’s face it – any college campus would be noisy compared with our house in the country.

As for me, once we finished with the requisite last minute trips to Target, Whole Foods and IKEA (which somehow took hours), I toodled home for my first night as an empty nester. Since Shawn had gone up to the Cummington Fair to watch the demolition derby, it was less empty nest and more a night of having the house to myself. Just me and the dog and about six loads of laundry left behind by my sophomore girl. I unpacked boxes and bags, threw a load in the washing machine, and settled onto the couch with some crackers and this amazing Morracan Carrot Purée. I’ve been whipping up vats of this stuff ever since my sister took me to Sofra Bakery and Cafe in Cambridge. It is delicious and zippy, exotic (the spices) yet familiar (carrots) and I am in love with it. I’d had something similar at a African restaurant in another part of Cambridge years ago but never managed to get my hands on the recipe. Now I have a recipe and it is a winner.

Above is our platter of five meze dishes – the offerings change every day – including the Moroccan style carrots with dukkah (second from the right) all of which is served with crick-cracks. The green drinks were a very refreshing basil infused lemonade. Honestly it was some of the best food I’d had in ages, so much so that I made my sister go back with me the following day for breakfast.

I know I’m a bit intense about this recipe, but I need to be honest with you –actually this recipe is three recipes (well four if you realize that one of the three has another recipe within it) in one, which probably will seem a bit daunting. I took the lazy woman’s way out and bought two of the components ready made, and when you do that this recipe becomes easy peasy. Hey, I bought Ana Sortun’s cookbook Spice just to get my hands on this recipe, so it seemed silly not to pick up a packet of dukkah and a jar of harissa paste at the same time. Even if you’re not near Cambridge you can call their store manager at 617.661.3161 and ask them to ship you your own supply, which will last for many batches of Moroccan Carrot Purée. Empty nest or no, you will be a very happy camper.

salt and pepper to taste

Chop the carrots into smallish chunks and put into a medium saucepan with water to cover. Bring to a boil, then simmer on medium high heat 20-30 minutes or until fork tender. Timing will somewhat depend upon the size of our carrot chunks. Drain the carrots but leave them in the saucepan and return it to the stove. Over medium high heat “dry” the carrots by shaking the pan constantly, sort of like you would for jiffy pop popcorn. You may be tempted to skip this step, but don’t or it will make your carrot purée watery. It only take a minute or so.

Then with a potato masher mash the carrots, cider vinegar and harissa to taste, cumin, ginger, garlic, and enough olive oil to loosen the whole mixture. You don’t want mashed potato smooth, you want the mixture to be smashed up, with a few chunks left for texture. Taste and adjust the seasonings.

You can serve this the way they do in the restaurant with a scoop of carrot purée, the dukkah sprinkled on top and crackers or bread to scoop it all up with. Or you can serve it in separate bowls of carrot purée, olive oil and dukkah. I’ve even spread some of the purée on a piece of bread then topped it with with a few slices of leftover steak and a handful of arugula to make a divine lunchtime treat. It would also be great to pack for a picnic.

So you really want to go all out and make your own harissa and dukkah? Here are the recipes (though I have not tested them myself). All three come from Ana Sorten’s cookbook Spice.

Combine all ingredient in a blender and purée until smooth. Sore in an airtight container in the refrigerator.

In a cast iron frying pan toast cumin seeds for a couple of minutes until fragrant, shaking the pan vigorously. Cool seed and grind with the saffron in a spice grinder or mortar and pestle. Mix with remaining spices.

In a cast iron skillet over medium/medium low heat toast the almonds until golden. Cool, then chop.

In the same iron skillet toast the coriander and cumin seeds until fragrant. Cool, then coarsely grind in a spice grinder or mortar and pestle.

In the same iron skillet toast the sesame seeds until just browned. Cool.

And yet again in the same skillet toast the coconut until golden and then cool.

Once everything is toasted and cooled combine together and grind or pound slightly to combine.