When is it Truly Spring?

According to the calendar spring showed up almost a month ago. Just not at our house. Instead, on the supposed first day of spring, it snowed. A little over two weeks later we didn’t even attempt to have an Easter egg hunt because the snow in our north facing yard had only melted three feet from the house. Plus in some sort of twisted joke Mother Nature decided to send us another dusting of snow on Easter. 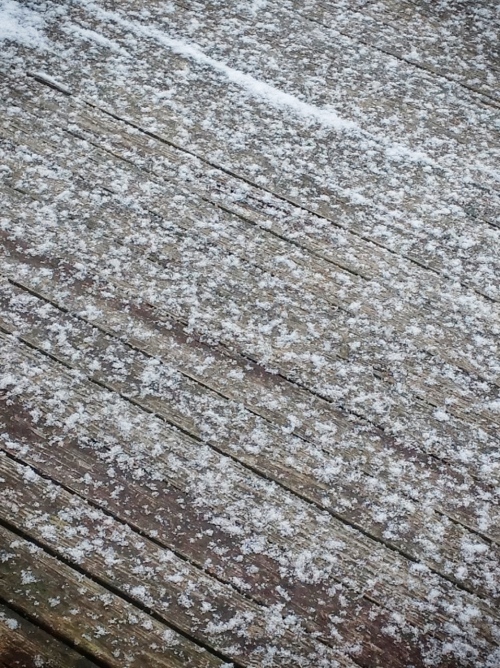 While I admit I’m no weather forecaster, this is how I judge if spring has truly come:

Yes our family has an annual pool, betting on which day of spring will be the day that the very last pile of snow will melt. Winner gets dinner of their choice.

I admit I secretly thought that between the mountains of snow we had this year and the endless snowstorms dumped on New England week after week, I had picked the winning date for 2015. Alas, while I was puttering in the yard yesterday planting pansies and raking up last of the previous year’s leaves, I noticed the one remaining pile of snow had become just a wet spot on the driveway. Which makes Shawn the 2015 Snow Melt winner with his pick of April 19th!

The last spot of snow melt from the winter of 2015.

My husband is such an egalitarian that he’s chosen to postpone his winning dinner until the kids come home from college next month. So I decided to make him a little precursor treat that sings of sunny days and warmer climates – Homemade Fig Newtons.

I started making these cookies last year while I was teaching a studio block at The Academy at Charlemont on the Foods of Massachusetts. This was an in-depth cooking class based on a curriculum I came up with 2005* where we explored and made all the official state foods of the Commonwealth of Massachusetts, along with several of the foods invented in or grown in the state, and (just to be fair) the contenders for what went on to become the “official” state foods.

On July 9, 1997 the Toll-House Chocolate Chip Cookie beat out the Fig Newton for the title of official state cookie of Massachusetts. If I’d been voting it would have been a hard call because they are both great cookies. There is no denying Ruth Wakefield’s chocolate chip cookie is an American classic, but that said, the machine to make Fig Newtons is pure genius. It is basically funnel within a funnel which simultaneously extrude the fig-y center into the center of the biscuit exterior. The Massachusetts connection is the machine to make this happen was invented in 1891 by James Henry Mitchel. Mitchel sold his machine, along with the recipe for fig cookies, to the Kennedy Biscuit Works (later known as Nabisco). Kennedy Biscuit Works had a tradition of naming their cookies and crackers after the towns surrounding Boston, Hence the now-famous name of Fig Newton. You can watch the machine in action in this video of Paul Newman’s Fig Newman’s cookies.

This recipe was inspired by Megan Scott over at Food52. I’ve doubled her recipe because I’ve learned that there is no such thing as enough homemade fig newtons. However many you make you will always wish you’d made more. Scott doesn’t say what kind of figs to use, but I’ve given you the option of making these with white or black figs – I usually make them 1/2 and 1/2. My experience is the white figs tend to be a bit softer and bigger to start with (less cutting up at prep time), but when I’m tasting the finished product side by side the black figs edge out the white by a smidge, at least for me. I also like to use the juice from the oranges to poach the figs in rather than water, which ads that little je ne sais quois to the recipe. Note: This really is a two-day recipe, you can’t really rush it. One day to make dough and filling then an over night in the fridge to chill it all down.

Finally I’d like to thank our friend Adam Gilbert for helping with the name. I was so frustrated when the dough portion would cook out to the sides instead of staying tightly wrapped around the fig filling that I was ready to jump up and down and say bad words. It’s the food stylist in me I guess. It really steamed my spatula that these fig newtons weren’t perfect. Adam just looked at me as I was vocalizing my frustration and said, “What are you talking about? I love the fact that they have wings.” Thanks Adam, for reminding me that food doesn’t have to always be perfect, it just has to taste good, and these wings are delicious. 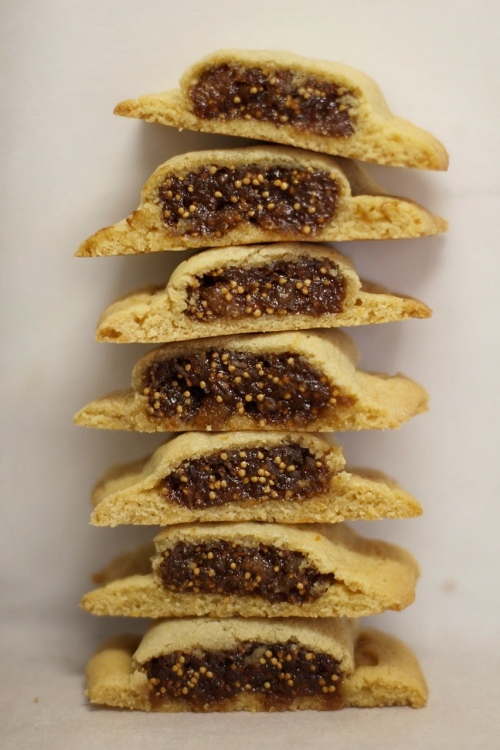 3 cups flour, plus more for rolling out

2 pounds dried figs (black or white or a combination)

Whisk the flour, baking powder, and salt together in a mixing bowl and set aside. In a large bowl (or the bowl of a stand mixer fitted with the paddle attachment), beat the butter and brown sugar in a large bowl until light and fluffy, about 3 to 5 minutes. Add the eggs, vanilla, and orange zest and beat until combined. Stir the flour mixture into the butter mixture until well blended. Scoop the dough onto a piece of plastic wrap, shape into a log, and refrigerate for at least 2-24 hours. Longer is better since this is a very soft dough (see note above).

Combine the figs and juice in a medium saucepan. If you don’t have quite enough juice for the full cup you can top it off with a bit of water. Bring the juice to a boil, cover, and turn to temperature to very low, simmering for about 8-12 minutes. When the liquid has almost completely evaporated turn off the heat and allow them to cool for 10-15 minutes. Transfer the figs and any remaining juice to a food processor and pulse until the mixture is completely smooth. If things are too dry add a smidge of water. You want paste, not soup and not cement.

The filling mixture has to cool completely before you put it in the dough or it will melt the dough before you even get it into the oven. If you are in a rush you can pipe fig goo into lines on a sheet of parchment paper and pop in the freezer to cool faster. Once the filling has cooled down I put it into a sturdy disposable pastry bag and cut off the tip so I can easily pipe out 1″ lines of filling onto the dough.

Update: I’ve since decided there is an easy way to shape the fig paste, click here to see/read how.

Move oven racks so they divide space into thirds. Preheat oven to 325ºF. Place 1/3 of dough onto a sheet of parchment paper which has been sprinkled liberally with flour. Sprinkle more flour on top and roll into a long skinny rectangle, about 7” x 15”. You’ll want to move the dough every so often and perhaps re-flour to keep things from sticking. Cut the dough down the middle so you have two long rectangles. Place 1/6 of fig filling in middle of one rectangle in roughly a 1″ line. Wrap the dough gently over the filling and flip so the seam side is touching the parchment. Repeat with the second rectangle. Place the parchment on a cookie sheet and slide the whole thing into the fridge while you get another sheet of parchment and repeat with the next third of dough.

You’ll be able to cook two cookie sheets at a time, rotating shelves and giving each sheet a 180º spin midway through. Bake 20-24 minutes on each rotation (40+ minutes total) or until cookies are just browning along the edges. Don’t forget to flip and spin the cookie sheets half way through the baking process. Once the first 4 logs are out bake off the last two.

After letting the fig logs cool slightly (4-10 minutes) gently slice them into cookies with a serrated knife using a sawing motion. You may need to clean the blade of fig filling every so often.

If your dough was a bit warm when you were rolling these out, or your filling was too hot these fig newtons develop very intense “wings”. Don’t worry – as Adam says they’re delicious. Store in an air tight dry container. Makes 70-86 depending on how wide you cut them. 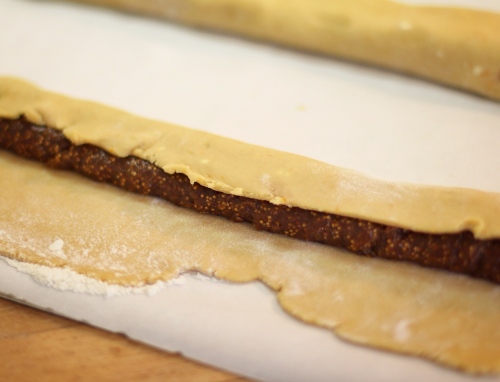 So hip, hip horay for true Spring, a husband who is willing to share his winnings, and remembering what is most important about the foods that come out of our ovens. 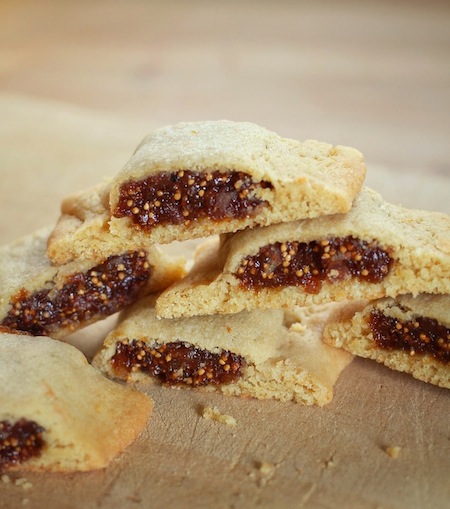 *State school curriculum requires all third graders in the Commonwealth of Massachusetts study their home state. I am so grateful to Isabelle’s third grade teacher, Pat Bell, who while she a rigorous and dedicated teacher, did not want to include cooking in her class. Her reticence on the culinary front gave me the opportunity to come in and teach an adjunct Massachusetts food class to her 2004-2005 students. Which I taught again when Russell was in third grade.

It turns out that my adopted state’s legislature has a passion for voting to make all sorts of food “the official ______ of Massachusetts”. We have an official beverage, fruit, muffin, dessert, vegetable, donut, and cookie. There has even been proposed legislature to declare an official state sandwich. Can you guess what they are (without googling the answers)?

6 responses to “When is it Truly Spring?”