Sometimes I come up with the absolutely, bestest ideas for other people, and I’m trying really hard to stop doing that. Or at least reign in my inclinations. A classic example is when Isabelle was about to enter 10th grade and I thought it would be amazing if she made a Periodic Table of Elements for her Chemistry class at the Academy at Charlemont. Not just a drawing of the elements, but a painting of all one hundred and thirteen of them, each on its own miniature canvases. When I come up with an idea for someone else it’s usually a doozy! 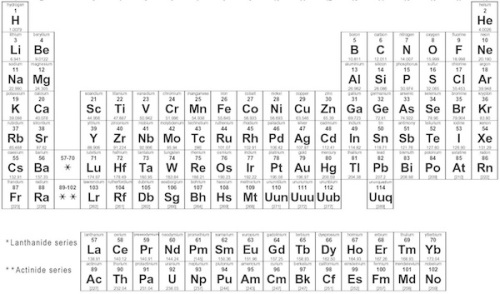 Unfortunately Isabelle initially said yes to my grand idea so I went down to the Guild Art Supply and ordered 113 – 2″ square canvases. A color scheme was come up with, and at one point in the year Belle and a friend painted the backgrounds for most of the series (there may have been some prodding on my part, I don’t really remember). It took her most of 10th grade for her to finally got up her courage and tell me she didn’t want to do this project since it was, as she truthfully informed me, “your idea Mom.” Gulp. She then asked if she could use a few of the canvases to keep so she could paint some pictures for her friends because they were, after all, pretty cute. As I was feeling somewhat deflated that she didn’t think my grand idea was quite so grand, I said yes.

A few years later Russell, who by 10th grade was much better at saying no than his sister, didn’t even let me finish my sentence when I suggested he take over the project. He just gave me the “you have got to be kidding me” face and I stopped mid-sentence.

So the project sat in a small box in the back of Isabelle’s closet until last year when Russell decided to skip his senior year of high school and go to college a year early. It was time for me to finish my great chemistry class idea and paint individual canvases of the Periodic Table of Elements. So as my son was finishing up the spring semester of his junior year I spent the evenings and weekends painting and hand lettering the metals, non-metals, alkali metals, alkaline earth metals, halogens, and chalogens. Unfortunately I’d forgotten about the canvases Isabelle had borrowed, plus there was that pesky element 116 Livermorium, which had been added to the table since I’d first conceptualized this little project, which resulted in my having to make a desperate last minute trip to the Guild to get a few more canvases. Unfortunately they were sold out. There is a reason everyone tells you not to procrastinate. The clerks at Guild took pity on me and scoured the store for sample mini canvases, which someone had painted on for display purposes. They let me have those samples so that I could paint over the micro landscapes and finish up my PTE.

There was also the very large reality of how to place 114 elements, all nicely painted on miniature canvases, onto a background. That was a pretty big mistake of mine, since a background was not something I had conceptualized at all when I was dreamt up this wonderful idea. My poor husband, as so often happens, was asked to come to the rescue. He can think in 3D and spatially understood that while the canvases might have fit into a box slightly bigger than a gallon sized paint can when stacked on top of one another, they were going to take up a heck of a lot more real estate when spread out into the Periodic Table of Elements. He also realized that those cute little canvases were not square. Not a single one of them, which meant the background had to be even bigger. Fortunately he has the brain of an engineer, the skill of a master carpenter, and the patience of a saint. He even calculated the maximum size this background could be so that it would still fit into my car, thus saving him the job of transporting the PTE to the Academy in his truck.

Just before the end of the school year I finished it. Five years and two chemistry teachers later. By some miracle the whole thing fit, by a few millimeters, into the space in the chemistry room designated for the Periodic Table of Elements. Hopefully I have learned my lesson when it comes to thinking up epic ideas for other people.

Also I think that for the foreseeable future my involvement with chemistry will be solely through food and cooking. 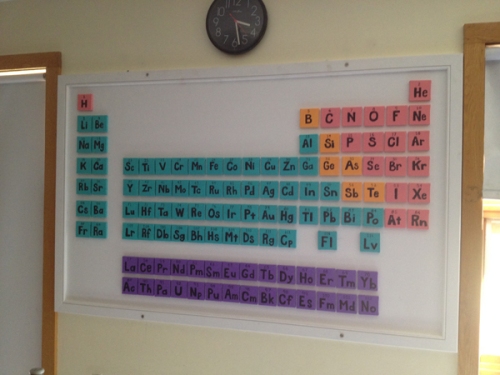 P.S. I found a wonderful book at the Jones library the other week, Paul Parson & Gail Dixon’s The Periodic Table: A visual guide to the Elements. You can find it on AbeBooks, but it costs much more than it’s original price of $14.95, so my recommendation is to go to your local library and check out their copy.

Photo credits: drawing of Periodic Table of Elements courtesy of Middlebury College. All other photos by Shawn Allen.

2 responses to “Owning It”