Consistency is not my middle name, at least not when it comes to Valentine’s Day. Sometimes I make cards, often I don’t. Occasionally I’ll bake up dozens of sugar cookie hearts and elaborately decorate them à la Martha Stewart with enough red food dye to make your teeth pink for days. Then the following year(s) I find I can’t be bothered to dig out my heart-shaped cookie cutters, let alone root around in the basement for my box of food dyes. I feel like I’m the poster child for a hit or miss Valentine gal. 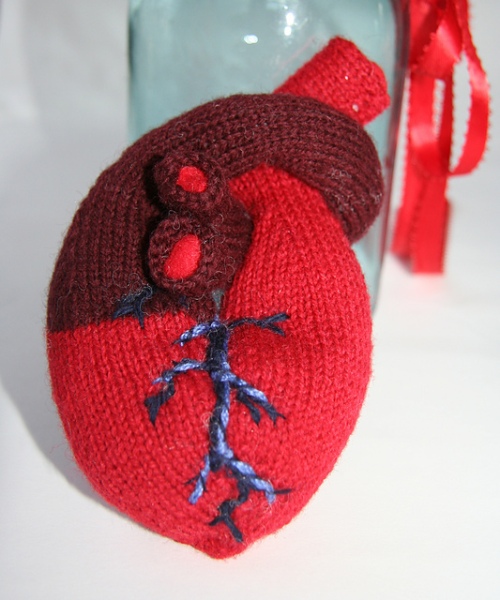 My friends are not like me. They actually plan ahead for Valentine’s Day. Hilary’s Vday imagination seems to know no bounds and each year sees her creating something more fantastic than the year before from an anatomically correct knitted heart to  sculpted love token molded from the red wax covering babybel cheeses. Diane’s family celebrates with a meal of red & pink foods. The mother of one of my daughter’s friends goes to an annual Valentine card making party where dozens of people drink hot chocolate and eat fun food while chatting and crafting Vday cards like maniacs. Perhaps I need to wrangle myself an invitation to that soirée. Even Julia Child and her husband Paul sent out Valentine cards instead of Christmas greetings, well they did that because they couldn’t get it together in December, but still.

This year I found the cake – a glorious cake – with which all Valentine’s Days (and many other days of the year) should be celebrated. It’s path to my oven came by way of Jessica last week on knitting night that she had found in the New York Times, which purports to be an old Sephardic recipe John Willougby got from Ruth Levy who had the cake made for her by a woman named Dawn Datso. Got that?

There that makes things clearer now doesn’t it?

Anyway I had been looking for something to make for my church’s Love & Chocolate fundraiser (we desperately need to put an elevator into the building) last Friday and this seemed like just the recipe to try. Someone else was setting up a chocolate fountain at the event, and I’d been asked to bring in a few goodies to sell during intermission. Baskets of chocolate ganache filled raspberries – check. Heart shaped GF brownies – check. Marshmallow peep goo formed into more hearts – check. My final donations were a couple of Clementine Cakes.

Me being me I did not bother to check out Mr. Willoughby’s recipe on the NYT website before heading off to cook. Rather I went boldly into the kitchen using the instructions Jessica rattled off as we were knitting which I managed to scribbled down onto the bottom of one of my patterns. It is after all, ridiculously simple. Simple that is until you read the thread of comments and realize how much could go wrong.

It seems that much of this cakes success (or lack thereof) lies in the juiciness of your clementines. It makes sense, especially if you’ve ever peeled a clementine and popped a wedge into your mouth expecting the juice to burst all over your tongue, only to realize you have a piece of orange-colored cardboard in your mouth that you then have to spit out since it is inedible. If you have tasted one of those icky kind of clementines then of course you can understand that a cake made with them would be awful. No matter how finely ground your almond flour or what shade of blue or green the shells of your free-range eggs are. If you want to make a clementine or tangerine or honeybell cake then make sure the citrus you use is delicious and juicy to start with. I am giving you instructions to taste test first. Fortunately my clementines were delish.

The snafu for me came in my thinking I could bake these off in mini bundt pans. That didn’t work out for me, though it did afford Shawn and I the opportunity to definitively determine how yummy the cake was as we snorfled down the broken bits. Let’s call it quality control rather than failure. A couple of the NYT readers reported they were able to make this in a bundt pan, so perhaps I was too eager to unmold them. Or my bundt design was too complicated. Maybe you have to grease and almond flour a bundt pan first. Who knows? From now on I am sticking to straight sided pans.

Assuming that you’re probably not going to read through all the comments on the NYT website either here are the reader’s digest version of what I think is important to know:

I used David Lebovitz’s recipe for candying the citrus. You can of course skip that step. It’s up to you. It’s pretty much decoration. For the Love and Chocolate cakes I candied thin slices of kumquat which were adorable.

One of the things I quite like about the cake is that it is naturally gluten free. These days more and more of my friends are giving it up so I love having a recipe (or three) that will work for them. I did overhear someone at L&C reach for the cake only to pull their hand back and say to their companion, “Ewww, I’m not going to get that – it’s gluten free.” Their loss. If you leave off the chocolate glaze it is also a dairy free cake. Supposedly the clementine cake gets better with age, though I haven’t had one around long enough to know what it’s shelf life is.

This recipe is a double batch so if you don’t want to eat it all or give some of it away reduce by half.

Give the citrus a gentle scrub then place in a non-reactive saucepan filled with water and boil for two hours. Every so often check and see if you need to add more water. Swirl the citrus into different positions with a spoon or chopstick. They don’t need to be babysat, but neither can they be completely ignored. Sort of like a 9-year-old.

After the citrus has been boiled scoop them out into a bowl and let them cool down enough that you won’t burn your hands when you slice them in half. You want to remove any seeds (which my clementines had few of, but the honeybells were chock full of). Do not be tempted to do this on a flat surface as you will loose some of the juices when you slice. Then pop all the seeded halves and juice into a food processor and run until you have a purée. Measure it out – you’ll want between 1  1/4 and 1  1/2 cups of purée for each cake, and since this recipe makes 2 cakes you should have 2  1/2 – 3 cups of  purée.

Preheat the oven to 350°F. Grease and line the bottom of two 9″ cake pans or four 6″ cake pans. I’d also strongly suggest you dust the greased pan with some almond flour, which will help the batter to not stick to the pan when you’re ready to unmold it.

Divide the batter evenly between the cake pans and bake for one hour. Yes, I said one hour, or until the cake stops snap, crackle, and popping when you listen to it. I was sure there would be a time difference between the small pans and the larger ones but there does not seem to be. You can also try the toothpick test, but this is such an audible cake I found listening was a good way to judge doneness. I let the cakes rest for a few minutes than ran a thin knife around the edge of the pan and let the cakes cool some more.

The color is a rich golden yellow/brown. Some NYT readers complained it was too dark, which was not my experience. My cakes all dipped a bit in the center as they cooled, which I found okay since that meant there was a place for more chocolate glaze. After the cake has cooled 15-20 minutes I removed it from the pans and then let it cool completely. If you want you can eat it as is. A lovely, simple orange almond cake. Great with coffee, something only an idiot (or person allergic to almonds) would say no to.

Or you can notch things up with chocolate glaze. This is definitely enough to glaze two 6″ cake tops. I haven’t tried it for glazing two 9″ cake tops. If you want it going over the sides like in the NYT or you want it extra thick you’ll need to increase the amount of chocolate and butter.

In a small saucepan start melting the butter over low heat then dump in the chocolate and corn syrup. Stir until melted then cool. You’re supposed to get the temperature down to 90ºF, but my thermometer doesn’t go that low so I just waited till it wasn’t too liquid, but seemed to still be pourable.

Then I poured it over the cake, using a spoon to get it right up to the edge. Let sit a bit for the glaze to firm up. If you want to decorate with candied orange zest I did it while the glaze was semi liquid.

*Hilary texted me that she made this the other night for her dairy free husband and substituted coconut oil for the butter. You only need 1/2 to 2/3 the amount of coconut oil depending upon taste.

A handful of kumquats or 1-2 tangerines

Wash and slice the citrus into very thin slices, removing any seeds. Boil in water for 10-15 minutes. Mr. Liebovitz strongly suggests a non-reactive pan for this process, and who am I to argue? Drain the citrus slices, then put them back into the pan with 2/3 cup water and 2/3 cup sugar. Simmer 10-30 minutes depending upon the thickness of your slices.

Drain citrus from syrup and let cool on a parchment paper lined tray. I saved the citrus infused simple syrup since it should be amazing stirred into an adult beverage or drizzled over a cake.

I found the kumquats, being so tiny, held together quite well and took less time to cook. The tangerines were vibrant in color and taste, but a bit raggedy so I ended up just using slivers of their rind to decorate my cakes. Of course not wanting to waste anything I slurped down the candied flesh which was delicious.

* There has been some discussion about spring-form vs straight sided pans. After making two dozen more of these cakes I’ve decided you can go with either.

I will suggest if you use a spring-form that you flip the bottom portion upside-down before clamping it in so that the cake is easier to remove (there is a small 1/8″ difference between the edge of the pan bottom and the actual bottom-bottom). 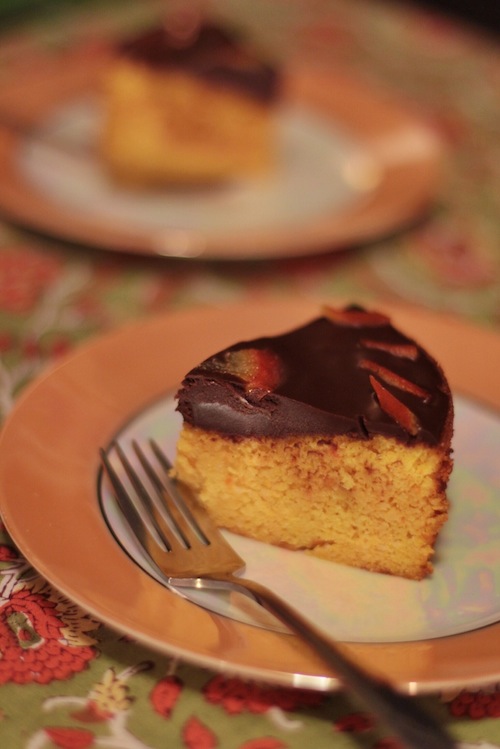 All others by Cynthia Allen

P.S. I am so in love with this cake that I’ve been obsessively making it for several weeks. If you want to read more about my further adventures with Clementine Almond Cake click here.

6 responses to “Hit or Miss Valentine”