Grammy Caldwell believed in advice – both giving and receiving. She loved quoting from the witticisms and proverbs in Benjamin Franklin’s Poor Richard’s Almanac, and she was known to make up quite a few of her own words of wisdom which she happily passed along. I’ve ben thinking about one in particular lately,

When the kids were still home I gave up on the clean house part. Okay, let’s be honest. Whether or not I had kids I never worried too much about the clean house part because cleaning has never been a major priority for me. Ironically I am actually quite good at removing dirt, grime, and tarnish; and spent one summer during college cleaning houses for other people. It’s not that I live in squalor (and trust me I don’t-it’s just a bit dusty and there may be a few bits of dog hair to be found), but a good book or an interesting knitting project or a yummy batch of biscotti all seem like much better choices of how to spend one’s time as opposed to wielding a vacuum cleaner to banish dust bunnies from under the couch or picking up a bottle of windex and rags to vanquish fingerprints (or in my case paw prints) from windows and doors. Having disclosed that I’m not the world’s foremost cleaner, I will admit to becoming a whirling dervish prior to anyone’s announced visits (especially when it’s my Mom). If folks show up unannounced I try to distract them with a cookie or three. It’s amazing what people will overlook when you feed them.

The dinner part was never an issue when there were children to feed, but it turns out that Grammy was right about the once a week dinner part when you remove offspring from the equation. With no kids to make meals for Shawn and I have become quite casual when it comes to our evening feed. I won’t say I haven’t cooked for the entire time since Russell and Isabelle departed to their separate institutes of higher learning, but the suppers I’ve produced since the drop off dates can be counted on less than ten fingers. Since I’m no longer responsible for feeding growing bodies I can feed myself hors d’oeuvre for dinner. Or a bowl of cereal. Perhaps even some eggs on toast. Any funny thing that catches my fancy when I open a cupboard or happens to be sitting on a shelf in the fridge. It’s rather astonishing how infrequently I find myself in front of the stove. I haven’t lost my appetite (or any weight for that mater) but I have lost a significant portion of my culinary audience. Plus my husband seems quite content to putter in the kitchen and whip something up for the two of us, or just himself if I happen to be so engrossed in a good book that I don’t feel like eating.

Add to this adjustment of empty nesthood the fact that when I make enough food for eight it actually lasts two people for four meals! With the kiddos home I’d make enough for what I thought was a small army and it would be gone in less than 24 hours. I began to lovingly refer to them as, “my teenage human locusts”. Our grocery bills are a fifth of what they were. Which is, I suppose, in part to compensate for the thousands of dollars we are now spending on their college meal plans.

Honestly I can’t say I’m feeling compelled to become a house cleaning maniac, but it would be nice to actually get back into the habit of cooking dinner – at least once a week. 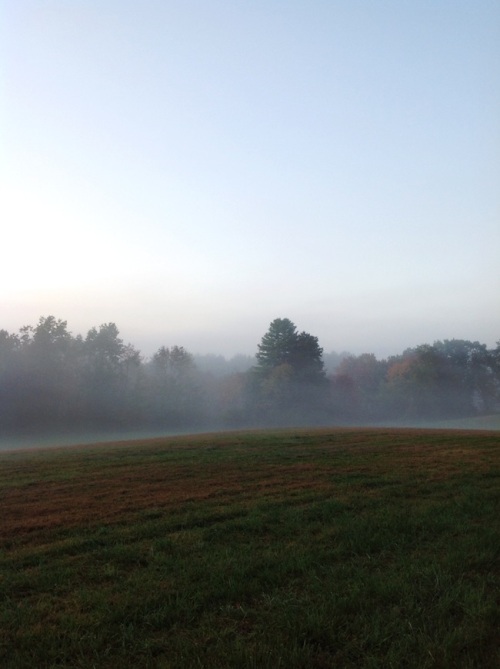 I took these photos on my way into church yesterday. Fall was one of Grammy’s favorite times of year and I think she would have loved the misty morning vistas I happened upon as I wove my way through the hilltowns to worship. ♥