A few weeks ago my friend Joyce sent out an email inviting anyone who was around to come and pick apples from the trees in their backyard*. These trees had decided to not wait for fall to begin giving up their bounty. It was either pick or watch them drop, so I went over and picked. After a little bit Joyce came out and helped me pick some more. And what the heck, those trees were loaded, so I grabbed another few bags from my car and we stuffed them with several dozen more handfuls of MacIntosh and Granny Smiths. It was a veritable apple palooza. 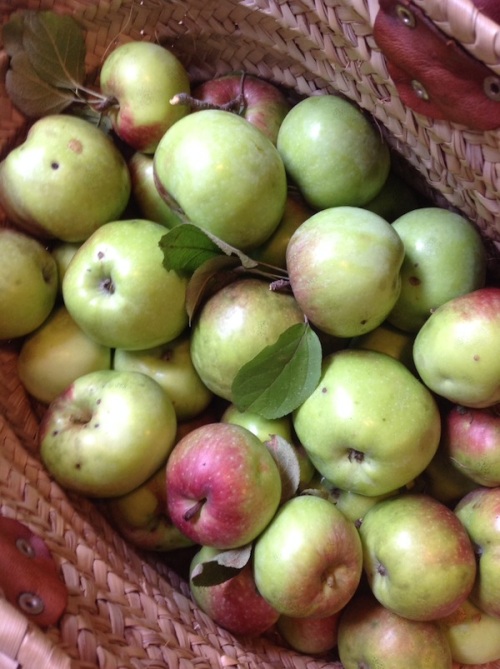 Of course then I drove home and realized I had just picked fifty-six pounds of apples. Which is a lot, basically the equivalent of a second grade child. Needless to say I have been processing them ever since. Some are perfect, though many of them are funky, free-form apples. No pesticides, no recent pruning, just grow as-you-may apples. Their shapes can make them tricky to peel, but perfect for my smooth applesauce recipe which requires no peeling or coring, just a foley food mill. The resulting quarts and quarts of applesauce have been just right to mix into several batches of vegan war cake (also known in my Grandmother’s day as a Victory Cake) or dollop on top of zucchini pancakes that Shawn and I have been enjoying for our end of summer suppers. Applesauce-land has been a tasty place to be these past few weeks. 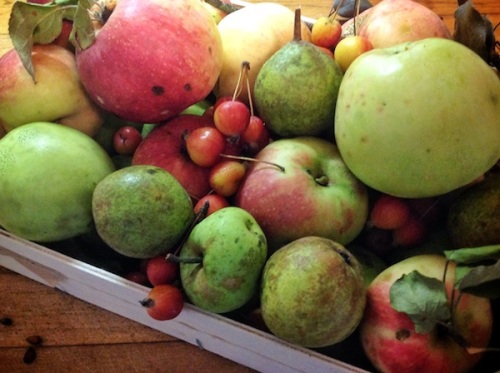 While all things applesauce has been great, the best apple treats (in my opinion) have come from sorting through the apples to find the more regular shaped ones, and then turning them into Apple Pop Tarts. Not the pop tart of your childhood that came in a box wrapped in foil. No, these pop tarts are from one of Nicole Frazen‘s blog posts featuring Camille Becerra’s Rhubarb Apple Pop Tarts. And to be perfectly honest I’ll say it right here – I do not make mine look anywhere near as beautiful as Ms. Becerra’s do. Seriously, check out the blog post because she makes hers look so good you’ll start drooling on your laptop. I think one of the reasons mine don’t look the same is because I’m in too damn much of a hurry to make them, bake them, and then eat them. Plus I’ve tweaked the recipe a lot, and the resulting dough, while delicious, is a bit more finicky. 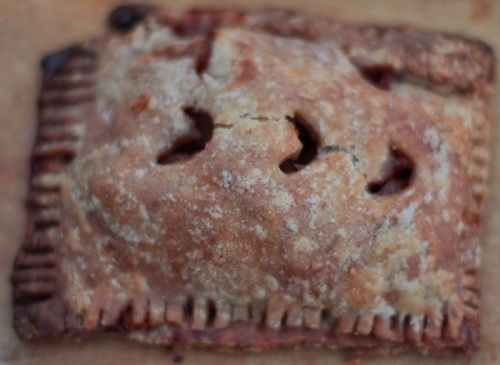 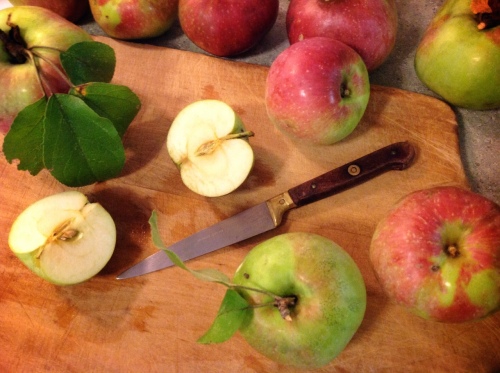 For starters I use all apples, not a mix of rhubarb and apples. One batch of pop tarts even featured some wild foraged apples and pears my friend Ronald had given me**. Since these were early apples I found them to be a bit less sweet than the later varieties. They also needed a boost of moisture to get them cooking, which in my applesauce I did with a splash of water, and in the Apple Pop Tarts I did with margarine. I’m pretty hooked on Todd Porter’s Brown Butter Apple Hand Pies where he partially cooks the apple filling before adding it to the pastry. Becerra uses this method in her fruit pop tarts as well. The reasoning behind this (at least to my mind) has to do with size. These smaller pies, because that is essentially what they are, cook faster than a traditional pie so there is less time for firmer fruits, such as apples, to soften up as they bake due to the overall shorter baking times. The pre-baking sauté jump starts the cooking process. 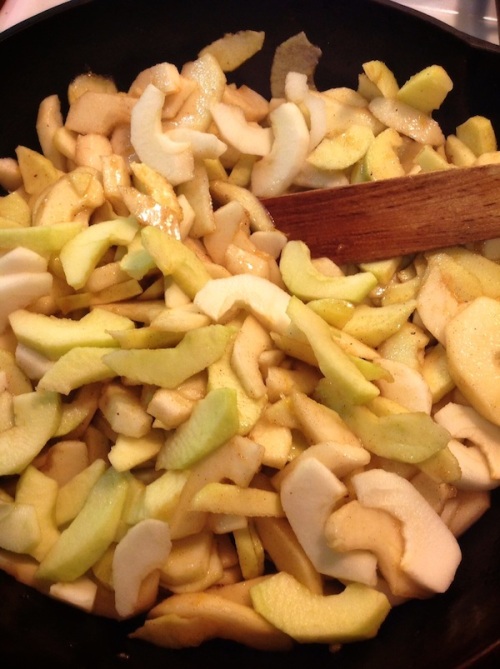 I also tweaked the crust to be a mixture of whole wheat and regular flours. Since my husband doesn’t do cow dairy I swapped out the butter for our favorite margarine. The result is an amazingly flakey crust, which truth be told, would never make it in a toaster, and can even be tricky to pick up in your hand. So perhaps these shouldn’t be called Apple Pop Tarts. How about Flakey Handfuls of Apple Deliciousness? Or I Can’t Stop Eating These Little Apple Pies of Wonderfulness? Or I could go short and sweet with Apple Nom-Noms. They are after all nom nom-alicious. 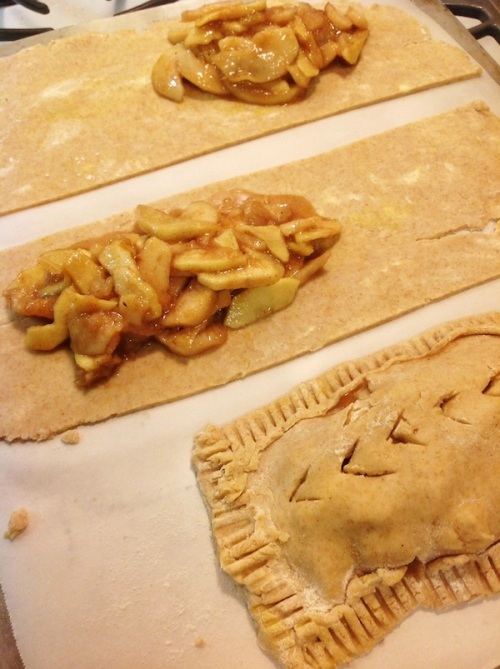 Honestly I always double this recipe. There are hungry teenagers who visit from college, church meetings we attend, plus friends who all appreciate an Apple Pop Tart or two. When Russell was home last weekend from Simon’s Rock his question was, “How many of these can I take back to school?” Also my APTs tend to be large, not because I’m greedy, but rather because I like the apple-crust ratio when they’re two fists sized, rather than one fist sized. Totally up to you what size you make them, and of course if they are too large you can always cut one in half and share it, like a good friend. 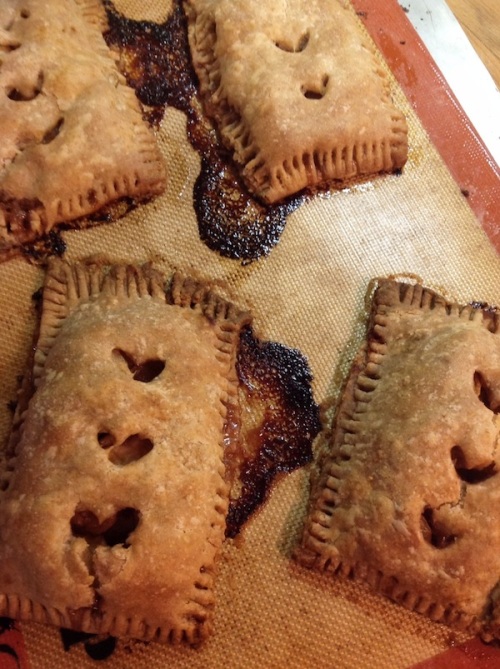 This is for the non-doubled amounts.

1/2 cup plus 2 Tablespoons margarine (I use Earth Balance)

zest from one small lemon (optional)

Make the crust first so it can chill for a bit. Combine flours, shortening, margarine, salt and sugar together in a food processor. Pulse several times to crumble fats into the flours. Do not let machine run continually. Drop in egg and 1 Tablespoon cold water and pulse 3-4 times. Open the top and give the dough a pinch. If it holds together dump it all into a large plastic bag or onto a piece of plastic wrap (giving it a quick knead or two to get the drier bits combined with the moister bits. If the dough does not hold together add water 1 Tablespoon at a time, pulsing 2-3 times to incorporate. You don’t want a dry dough that doesn’t hold together, nor do you want a wet sticky dough. Just enough moisture to hold together. I have found with the high amount of fats in this recipe along with the egg that I need very little water. Form the dough into a rectangle (more or less) and refrigerate while you make the filling.

Side note: I like the mix of whole wheat and plain flour. You can also use regular whole wheat flour and white pastry flour, or even all white flour. I have not tried it with all whole wheat. Also I haven’t tried it with butter (instead of margarine), though my guess is it would be as yummy.

To make the filling I put the margarine, sugar and spices into a large cast iron skillet and turn the heat on for a few minutes to melt the margarine, then quickly turn the heat off. Next peel and core the apples, slice into thin slices, tossing every so often with the melted margarine and sugar. If your apples are smaller you’ll need more of them since they’ll yield less usable apple (for some reason there seems to be the same amount of core in a small apple or a large one). Once you’ve sliced the apples all up, turn on the heat to medium or medium high and start cooking. Stir the apples around so the sugar doesn’t burn and they cook evenly. For a double batch this takes me 17-24 minutes. I want the slices to be slightly soft, but still have a bit of crunch to them. Cool mixture quickly by spreading it out onto a jelly roll pan. Or if you’re not in a hurry, scrape into a bowl and let cool, lightly covered, overnight.

To make pop tarts preheat oven to 400ºF. Liberally sprinkle your work surface with flour and roll out 1/2 dough at one time. Making sure the dough and counter are floured roll out cold dough to 1/4″ thickness, moving it around as you roll so it doesn’t stick. I then slice dough into rectangles roughly 4″ x 10-12″. Move dough strips onto baking sheet covered with siplpat mat or parchment paper. Spoon on about 1 cup of apple fillings, then fold dough over and seal edges with a fork. Poke a few small steam vents along the top to prevent the pop tarts from exploding.

Bake 15 – 20 minutes then swivel the baking sheet 180º and bake another 15-20 minutes or until the dough is nicely browned and you see some of the filling bubbling along the steam vents. Cool and eat. Makes 4-5 large apple pop tarts. See why I said I always double the recipe? 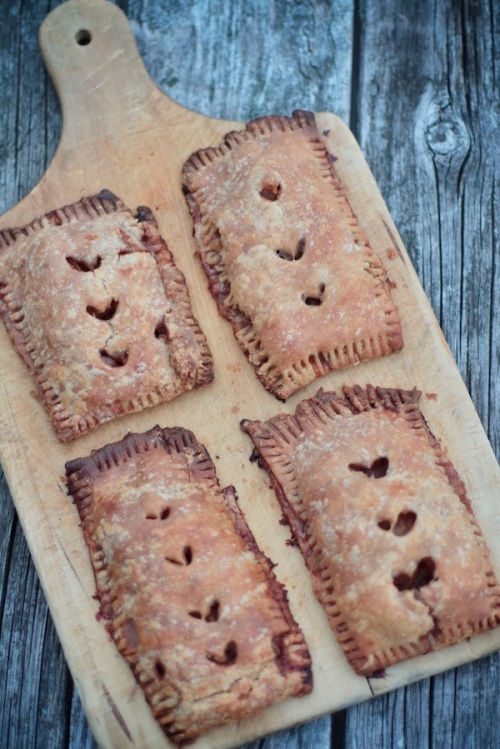 *What do you do if you don’t have friends with apple trees? My first suggestion is, if you live in apple growing country, to buy several different varieties of apples to use. Ask the farmer as they will have great suggestions for which apples are the best cooking apples. If you don’t live in apple growing country, then get a mix at the store – MacIntosh, Granny Smith, Empire, Cortland, Mutsu, maybe throw in a pear to mix things up. What you want to do is layer the flavors of apples. More like four part harmony than a solo. 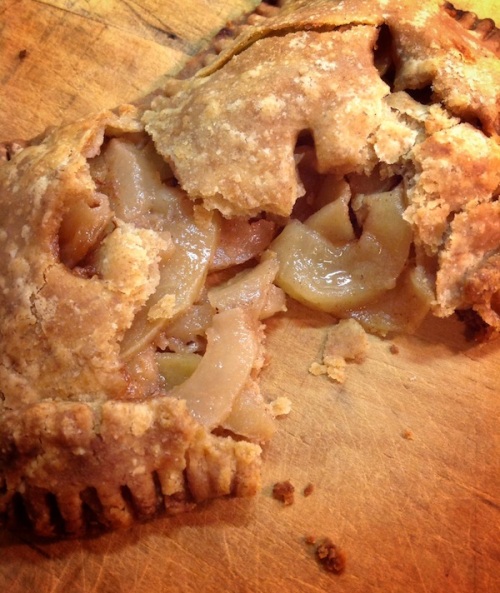 ** Ronald didn’t just give me a bag of wild apples, pears and crabapples. He also gave me little bags of wild olives, grapes, juniper (homemade gin anyone?), a tuber you use like a potato, Queen Anne’s lace which you can use like pepper, and all sorts of other goodies from the woods. He had a Foraged CSA share this year. Some amazing young woman tromped through the woods and brought him all sorts of wild edibles. How nifty is that?