If I were to sign my name with food instead of letters, what food would I use? It could be almost any recipe from this blog, though lately I think my culinary John Hancock would most  likely be Raspberries filled with Chocolate Ganache. 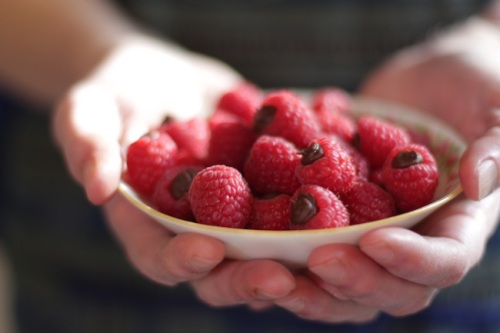 It’s a great dessert recipe with only three ingredients, but best of all it makes you look like a rock star* in the kitchen. Most people I’ve met think stuffing a raspberry is kookoo, that is until they eat one. Close your eyes and imagine a tart, juicy raspberry filled with a tiny dollop of smooth creamy chocolate ganache. Are you drooling? I know I am because these are so good you want to pop them into your mouth like candy, but the flavors are such a sublime pairing you want to savor each one. I have yet to take these anywhere without hearing at lease one person moan out loud when they eat their first one. I love foods that evokes such an earthy response! 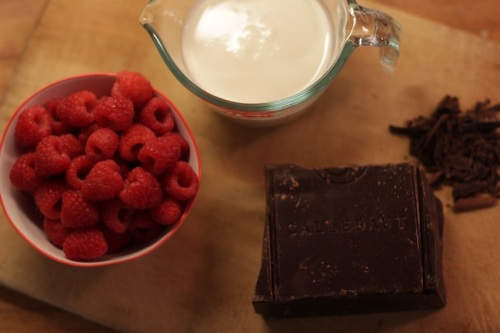 I first found the idea for this recipe on pinterest. There was no recipe linked to the image, but it seemed fairly straight forward. I modified a basic ganache recipe from Rose Levy Bernenbaum, which I then stuffed into a pastry bag with a plain tip, and started to fill the raspberries.

At first it didn’t work because the ganache refused to come out. It was malleable within the pastry bag, but no matter how hard I squeezed it would not squirt into the raspberry hole. I nicknamed this problem pastry bag constipation. Apparently the metal pastry tip changed the temperature of the ganache enough to solidify it within that small metal portion. Take away the pastry tip and things started to flow.  So now I use a disposable plastic pastry bag without a tip, and cut the tiniest of holes at the pointy end. If you have any ganache leftover you can freeze it (that is if you don’t squirt it into your mouth or all over a bowl of ice cream. Or use it to sign your name… 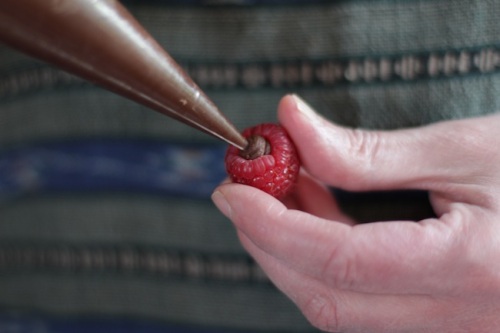 If you are making these for a crowd wait until raspberries are on sale or you can get them in season. This much ganache will fill approximately 2  1/2 pounds (roughly 4 pints) of raspberries.

Heat the heavy cream in a small saucepan until simmering. As it is heating up finely chop the chocolate. When the cream is bubbling along the edges pour over the chocolate and gently stir to mix all together. Let the ganache cool a bit and then pour into a disposable pastry bag which you have set into a tall glass. Secure end with a rubber band and when the ganache cools to room temperature (you don’t want to cook the raspberries) snip the end off the pastry bag and pipe the ganache into the raspberries. If you find that you have started piping while the ganache is still semi liquid then make sure the raspberries are upright in a container so they don’t drool. Keep cool until ready to serve. Since raspberries are so delicate you do need to make these fairly close to the time you plan to serve them. 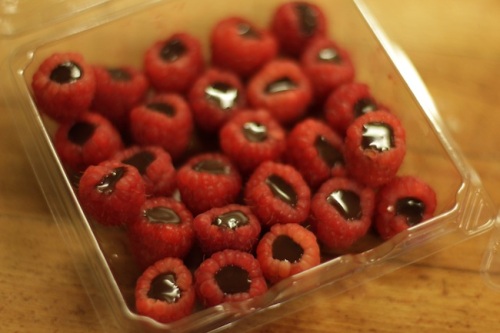 When people tell you how great they are  just smile and say, “It was nothing.” 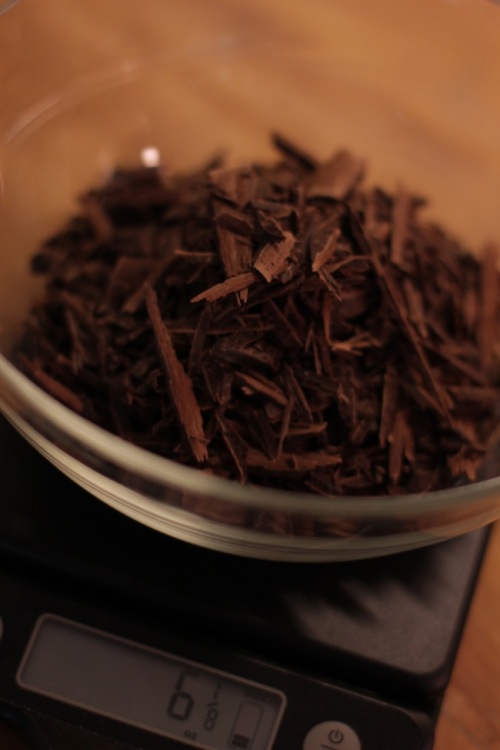 *I felt like this dessert achieved full Rock Star status when my son’s 11th grade class requested I bring it to their school’s semi formal. There were any number of things I could have made for them, but his one was the one recipe they all voted on.