I have more kitchen stuff than any normal person has a need for. I tell myself that the vast horde of pots, pans, obscure devices, and hundreds of cookie cutters are necessary because of my food styling work, but the truth is I have a bit of a collecting problem. So when I read Jane Lear’s post on her favorite pot it got me to thinking about what cooking equipment I can’t live without.

The first item on my most-loved-tool list would have to be My Mother’s Potato Masher. 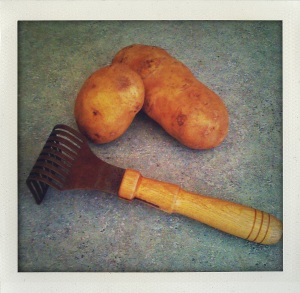 That’s its official name, named for my friend Jessica’s mother Virginia. My Mother’s Potato Masher is one of those simple yet effective tools that does one job really, really well. The potato masher that mine was fashioned after had been passed down from mother to daughter until roughly thirty years ago when the handle broke. Not an unexpected occurrence given it’s age but frustrating nonetheless.  A woodworking son-in-law fashioned a new birch handle, but there was a bigger complication than the mere cracking of wood. You see Mrs. Nicoll has two daughters. I have no idea how the passing along of the potato masher worked in generations past – perhaps there was only one daughter at a time or the masher always went to the eldest or maybe one daughter would get the family silver while the other got the potato masher, but whatever the case it was clear that Mrs. Nicoll’s lone potato masher could not possibly be bequeathed to both her daughters.

Luckily for the Nicoll sisters and me this particular potato masher had been patented, and around the time of the broken handle the patent was about to expire. So Mrs. Nicoll and her husband renewed the patent, had a die cast to produce the high carbon steel masher head, ordered lots of birch handles, and went into business manufacturing potato mashers.

Sadly the potato masher business has been sold, but you can still find one occasionally on eBay. Which is what I’ll have to do since I didn’t hoard a bunch while the Nicolls were still in business. That or my two kids can will have to do rock, paper, scissors for it out once I’m dead. In the mean time I will continue to use it to make the best mashed potatoes ever.

Leave a Reply to Cynthia A. Cancel reply