I have to be honest here I have been out of control lately. My kids are asking if I have a problem. Even my husband raises his eyebrows when I crank the oven to 400º F again. It seems I have a bit of a pie obsession. I can’t stop making them. It started when I was planning this post on pies. Friday Pie Day had a nice ring to it reminiscent of the rhymes in Nick Sharratt’s The Green Queen. Thing is I started making pies last Tuesday and it has stretched till today, Wednesday, well beyond Friday. Of course if I ruled the world every day would be pie day, at least in summer so perhaps there isn’t a problem. 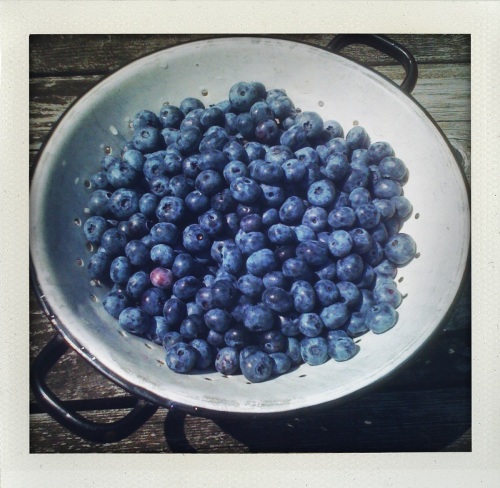 Besides, how is any sane person supposed to ignore all the farm stands, farmer’s markets, and bursting blackberry bushes in their own back yard? It simply can’t be done. So I succumb to the fruits. The peaches from Clarkdale Fruit Farm and Atkins Farm, the blueberries from Golonka’s and Quontquont Farm. I’ve even found a few farmers who have managed to keep harvesting local strawberries and raspberries. Plus the first crop of tart crisp Duchess apples are in. Then there is my own backyard where the blackberries are ripe and ready. It really is impossible to not make pies.

Just so we don’t get into an argument I want to be clear that my definition of pie is pretty broad. I happily lump crisps and crumbles into the category of pies. If you’re a purist, I’m sorry. If you want more complete definitions I suggest Richard Sax’s book Classic Home Desserts chapter 1. Apologies and disclaimers out-of-the-way here are the two main ways I’ve been making pies this week.

I have been making a variety of pies this past week. Blueberry Crumble, Peach Crisp, Blueberry-Raspberry-Peach Rustic Tart. I even did a crazy Peach-Raspberry-Blackberry-Blueberry-Strawberry pie which was pretty fantastic. All of them start with a Fruit Base. A fruit base is what the name implies – fruit with a little bit of sweetener plus a little bit of thickener. What are the proportions? I can’t really tell you since it varies from variety to variety. Blueberries have been pretty sweet this year so I have dialed way back on the sugar I add. The early peaches are so juicy I’ve actually not been adding all their juices since I don’t want to end up with Peach Soup Crisp. I’ve been thickening with a Tablespoon or two of flour, but I know some cooks who like to use cornstarch. With these simple summer pies I haven’t used tapioca, though you could. Tapioca tames fruit juiciness quite well. For drier fruit pies like apple I don’t bother with the thickeners (just keep that in mind for fall). Sometimes I add a smidge of cinnamon. Or a squeeze of lemon juice. The main thing I do is taste before I pour the fruit base into the pie plate or crust. Just a nibble to let me adjust things if I need to. I have been making smaller pies so the proportions are roughly as follows:

If you are using peaches give them a 10 second dip on boiling water to help loosen their skins. Peel and slice. Otherwise dump the fruit in with the sugar, flour and any seasonings. Your sugar amount will depend on the sweetness of the fruit you are using. The flour will depend on the juiciness as well as how juicy you like your finished pie. I don’t like my pies so firm the filling can be sliced and not move, nor do I want them swimming in their own juices. It’s all about personal preference. Then it’s a matter of if you want your crust on the bottom or top. Crisps or crumbles have the fruit on the bottom and the “crust” on the top. Rustic pies are crust on the bottom with fruit on top. 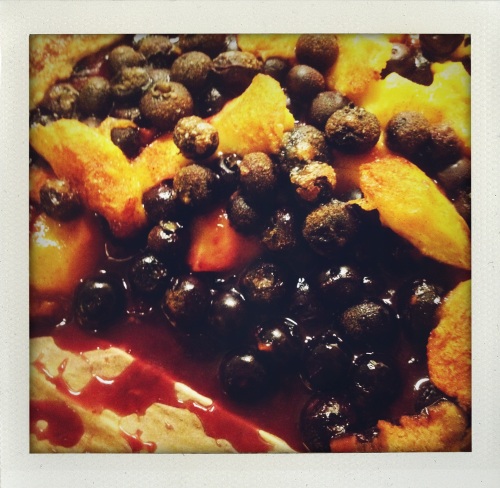 In either case bake at 400º F for about 45-55 minutes until the fruit is juicy and bubbling and the crust or crisp is browned nicely. I suggest using a jelly roll pan to place your pie or crisp on just so you don’t end up with any overflow juices dripping onto the bottom of your oven where they will sizzle, blacken, and eventually set off your smoke detector.

The easiest type of pie I make are crisps or crumbles. If you’re unfamiliar with them they are simply a fruit base plonked in a pie pan or some other vessel topped with a mixture of butter, sugar and flour which has been rubbed into crumbly goodness. When baked this results in a juicy fruit pie covered with crunchy, crumbly topping. Add some ice cream and you may be approaching heaven. My Mom is famous for her deep dish blueberry crumble, which was one of the first pies I learned how to make. Over the years I have tweaked the crumble/crisp topping by adding oatmeal. Occasionally I’ve even substituted the topping from Magnificent Muffins onto a pie since it is essentially a crumble topping. My friend Laura B. made us a fabulous mixed fruit and berry crumble a few weeks ago whose topping included almond slices and minced candied ginger. Delicious.

Dump everything into a bowl and then rub the butter into the dry ingredients with your fingertips. You’re not trying to melt the butter, but simply to coat little chunks of butter with flour and sugar. You could do this with two knives or a pastry cutter. The mixture should be, as the name implies, crumbly. Nice fat crumbs the size of peas to small raspberries. I don’t recommend doing this with a food processor since the likelihood of over-processing is high. Also I tend to make this in the bowl I tossed the fruit in which serves two purposes. One it gives you less mess to clean up. Two it soaks up any lingering fruit juices that you didn’t get into the fruit portion of your pie. For the smaller pies you won’t use all this crumble topping. If you make a 9″ pie you will probably use it all. Depends on how thick you like your crumble. Bake as directed above, but don’t forget the jelly roll pan or you may have spillage in your oven.

* Now here’s a secret – you can make double, triple this amount of crumble topping and freeze it! Then any time you feel like pie, simply toss your fruit in some sugar and flour, pull out your crumble topping and sprinkle on a few handfuls and pop it all into a hot oven. Easy peasy!

Rustic pies  are so much fun because you don’t bother with a pie plate, you just roll out the dough, plop the fruit on top, fold up the edges, and bake. They are elegant in their simplicity and I adore the fruit to crust ratio. The one draw back can be that pie dough scares some people. It shouldn’t but it does. Here’s some advice – #1 don’t over handle,  #2 think flaky and crispy, #3 stop worrying. The don’t over handle part is key. This isn’t bread dough so don’t knead it. If you use a food processor don’t let the dough form a ball in the processor. Over handling makes pie dough tough. My second point is using two fats. An easy to incorporate fat like vegetable shortening or lard combined with a tasty fat like butter. If you want to read more about flaky pastry I recommend the Pies & Tarts chapter of the 1997 edition of Joy of Cooking edited by Maria Guarnaschelli.

I like to make my pie dough in a food processor. I put the flour, sugar and salt in and pulse once. Then I add the butter and vegetable shortening and gently pulse. Do NOT switch it on. You are looking for crumbly pea size chunks of fat. Dribble on your water and pulse twice more. Give your dough a pinch. If it holds together dump it all out onto a piece of plastic wrap. If it doesn’t hold together dribble on a bit more water and pulse twice more. Once the dough is on the plastic wrap I squeeze it together with my hands, wrap it up, and pop it in the fridge. Do NOT knead. Let the dough chill and relax for a couple of hours or up to two days. This should be enough dough for the fruit base above. If you are serving a large number of people or you bought a lot of fruit double the recipe. After it has chilled roll it out on a floured surface making sure it isn’t sticking. Then roll the dough onto your rolling pin and lay it out on a parchment paper lined jelly roll pan. The dough may hang over the edges, don’t worry since you will fold it up after the fruit is on. Dump on your fruit base and fold up the edges. I often sprinkle the crust with some cinnamon sugar or coarse sugar for a little sweet crunch, but it’s optional. Bake as directed above. I often serve my Rustic Pies on wooden cutting boards. 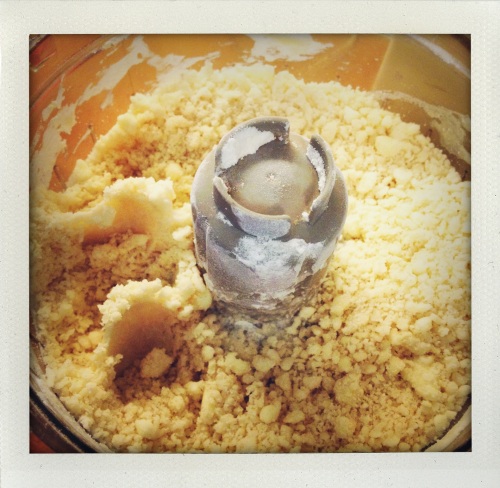 This was a pretty epic post for something as simple as pie but I’m hoping that by sending it out on Wednesday you’ll be inspired to make some dough or crumble topping today, pick up some fruit tomorrow, then make some pie on Friday (Pie Day). 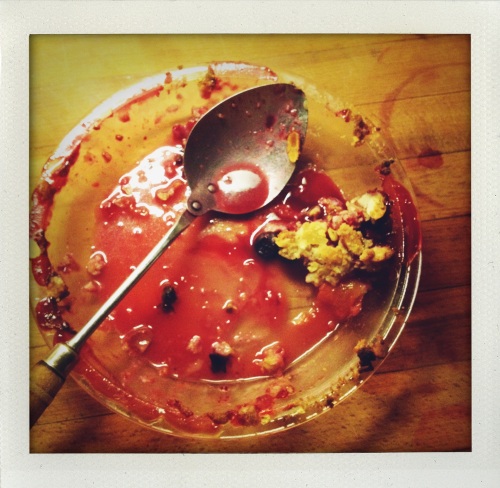 I’d love to hear what your favorite fruit and crust combination is.

8 responses to “Friday is Pie Day”