1. My daughter Isabelle went to Montessori with Isabel K., or the other Isabel,  as we call her.

2. Isabel K.’s mom Hilary and I became friends and now are in a knitting group together.

4. Hilary’s step father was also a friend of my father. I met Mr. Catherwood several times when I was growing up without knowing anything about his step daughter Hilary or his delicious sangria.

I could have stopped at 3, but I just wanted to show you how wacky and wild things are in this six degree business.

I have a zerox copy of Bill Catherwood’s recipe in my kitchen drawer, though for most of the summer it resides beneath a magnet on our fridge. It’s so good I really don’t bother with other sangria recipes*, though there are plenty of them out there.

Of course me being me I’ve tweaked a few things. I use various red wines, often the inexpensive ones from Whole Foods or Trader Joe’s. You’re adding so many things to sangria you really don’t need to splurge on expensive wine. If you want to follow Bill’s recipe faithfully he called for Gallo Burgundy. Also I don’t always add the rum called for, mostly because I don’t always have it on hand. Seems great both ways.

Note this makes enough for a big party. You’ll probably need two pitchers, or will end up refilling one pitcher twice. If you want to cut the recipe in half I would simply halve all the ingredients except the fruit, I’d still stick with an orange, lemon, lime, and peach. My final suggestion is do not be tempted to use honey in place of the sugar. Even mild honey. It is yucky and even though you can drink sangria made with it you shouldn’t. Trust me on this, or ask my friend Lisa.

Dissolve sugar in large pitcher with club soda. Make long peels of the orange, lemon, and lime and put into the pitcher. Remove the pith (the white part of citrus) and chop fruit. Add the chopped citrus fruit to the pitcher, along with the peeled and chopped peach. Add the wine and rum and a splash or two of pineapple juice. Serve chilled with lots of ice.

I especially enjoy sangria outside on a sultry evening. The clouds this sangria evening were spectacular. 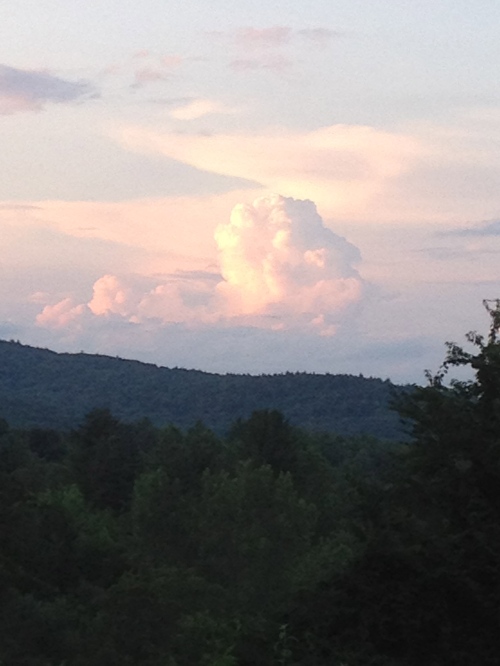 *When Shawn and I recently went to the tapas bar in Northampton we got to choose from a dozen different Sangrias on their menu. It was a lot of fun, and we ended up with a carafe of watermelon sangria. 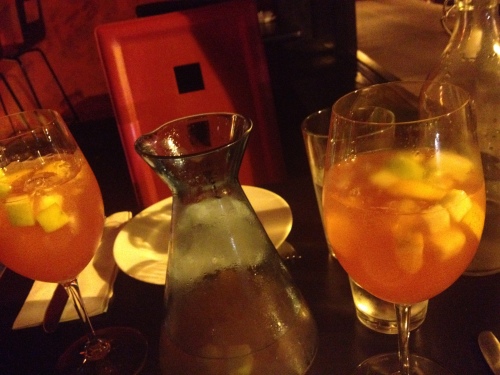 I am curious to know what your favorite sangria recipe is. Care to share?