Middle age has allowed me to hone in on more of what is essential – or at least what is essential to me. I spent the first twenty years I was a professional cook collecting hundreds of cookbooks and specialized cooking tools. For the last ten I’ve been divesting myself of both. It’s not that I stopped having kitchen lust for more, rather I’ve become aware of how much I am able to do with less.

In part it helps that I’ve always adhered to the idea of buying quality and taking care of it instead of buying cheap and needing to replace. The expensive knives I bought in my 20s are still lined up in my knife bag ready to slice and dice. Perhaps they’re a little thinner from all the sharpening, but if you don’t abuse them, a good knife should last a lifetime. My mandoline is an exception to this theory of high price as an indicator of high quality.

Back in the 80s I couldn’t justify the $300 price tag for the fancy French stainless steel version, even if it did come with the cool waffle cutting blade*. Instead I went for the inexpensive plastic Japanese model, which has turned out to be a real kitchen work horse. The blade is still incredibly sharp and it has sliced and julienned vegetables faithfully for years.

For those of you that don’t know a mandoline is a manual precursor to a food processor. Initially made from a slab of wood with a blade inserted in the middle and several perpendicular blades attached. One of the first reference to it was in an illustrated cookbook by Bartolomeo Scappi’s from 1570. It allowed the cook to slice vegetables into thin matchsticks. Of course y the same can be done with a knife, but the time required to get uniform slices is considerably more than dragging a few carrots, cucumbers or potatoes over the mandoline’s blades. 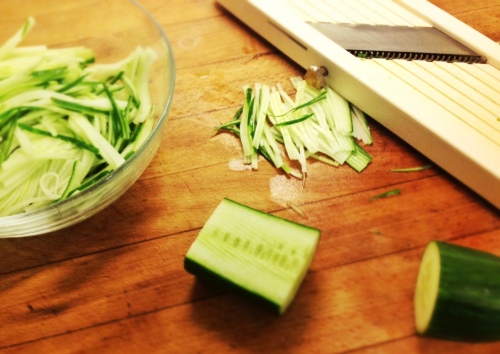 I find this tool especially useful when making vegetable sushi,  Vietnamese fresh spring rolls, fall vegetable strudel or vegetarian lasagna. Bowls of identically sliced matchstick cucumbers  appear in minutes. Paper thin ribbons of zucchini slide off the cutter with little effort. It may not be a tool I use everyday, but it is a joy to use when I need it.

A word of caution – be wary as you speed along and don’t forget to use the plastic finger guard. Since the plastic guard won’t allow you to slice the last 3/8″ or so of the vegetable either chomp on the scraps as you prep (cook’s prerogative) or give them to someone who owns chickens.

*The stainless steel versions are much less expensive these days, but still considerably more than the plastic japanese mandoline.