It has been a golden weekend here in Western Massachusetts. Not so much the weather, rather it has been two days of pure gold with what’s been going on.

It started Saturday morning with the Altar Guild polishing party at church. I know, I told the members of the guild it was a polishing party, but in reality polishing is a lot of hard work and elbow grease to get things gleaming in preparation for Advent and Christmas. To give our efforts the feeling of festivity I brought in a few snacks, okay I’ll be honest and say that I bribed the guild and helpers with the promise of food, including my 24 Karat Carrot Cupcakes – which are carrot cupcakes with a smidge of gold leaf applied to the cream cheese frosting. I figured if we were busy making the chalices, patens and alms basins sparkle for the glory of God then we could all enjoy some sparkly food for our efforts. A group of Sunday School kids showed up to add their nimble (and very, very tiny) fingers to our morning’s work, and we had everything polished in record time. I overheard one of the kids saying people had better wear sunglasses in church the next day because everything was so shiny. 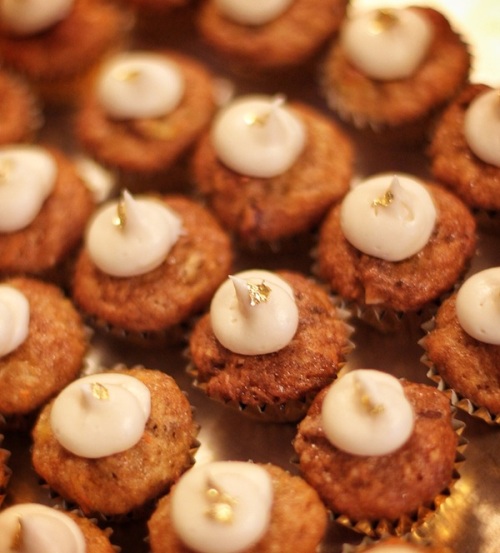 Later that day my friend Tom Myron celebrated his birthday by taking a bunch of us out to hear the Québécois group Le Vent du Nord who were playing in town. I’ve listed to their CD Le Vent du Nord Symphonique, which Tom wrote the orchestra arrangement for, ever since I received it as a present on my 50th birthday. When I say I’ve listened to it I actually mean I’ve listened to it a lot (iTunes keeps track and it’s a little embarassing to say how many times I’ve played it cause I love to put it on repeat and crank the volume). As incredible as the band is on CD, they rocked in person. I didn’t understand how fluidly the band members moved between various instruments as well as how they all take turns singing lead on vocals until I saw them on stage. In between songs the band members described the marvelous land up north that they hail from which, until the British invaded (a hundred plus years ago) “had no rain or any mosquitoes, the rivers ran with maple syrup and everyone spoke French.” The evening was spectacular and I wanted to take the whole band home with me so I could listen to their delicious French accents and songs for a while longer.

Then on the way into church this morning there was the most glorious golden sunrise bursting over the hills as I drove into town. I admit I don’t always appreciate crawling out of bed so early on a Sunday, but the reward of watching the sunrise, along with the quiet of being in the sanctuary before anyone else shows up always make it worthwhile. 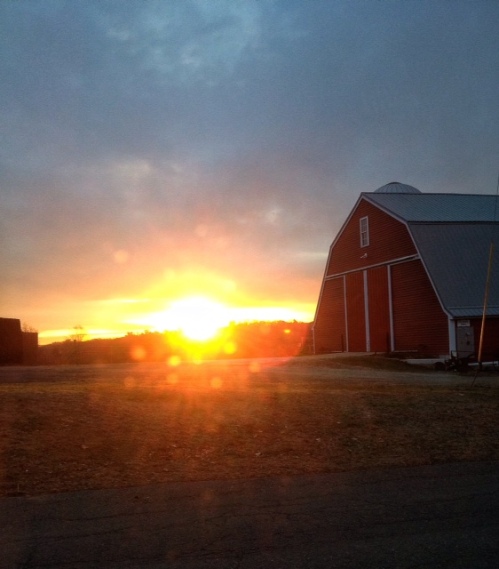 When I came home from church I decided to make some more 24 Karat Carrot Cupcakes as a  one-day-late birthday present for Tom. Since some of his family is gluten intolerant I made this batch with Cup4Cup, the French Laundry’s flour substitute. It is hard to tell the difference between the two versions (GF and non-GF) when they are baked into micro cupcakes. I’m guessing that it would be the same if you were to make this recipe as a cake, but I didn’t test it out. If any of my readers try the GF version in cake form please let me know how it works.

This carrot cake is based on a recipe from the Teatown Cookbook, which my Aunt gave my Mom sometime back in the 1970s. I modified the recipe into a Garden Cake for an Easter piece that ran in FamilyFun magazine back in 1998, complete with crushed chocolate cookie dirt, a marzipan bunny and vegetables. I’d been channeling Beatrix Potter’s Peter Rabbit and got carried away with myself. Over the ensuing years (well, actually decades) I’ve cut back on the amount of sugar I use, substitute unsweetened organic coconut which has much smaller pieces for the sugary, clumpy coconut originally called for, and have gone from coarsely shredding my carrots to finely shredding them (less likely to stick between your teeth I’ve found). I also like to bake these into one-bite cupcakes instead of round or rectangular cake. The cupcakes are fun and the perfect size for adding a touch of gold to. True one bite wonders. The idea for adding edible gold came from a gilded cupcake my sister picked up for me somewhere in Cambridge. I thought those cupcakes were unmemorable taste-wise, but the idea of adding a bit of gold leaf was genius and I’ve been using it ever since. 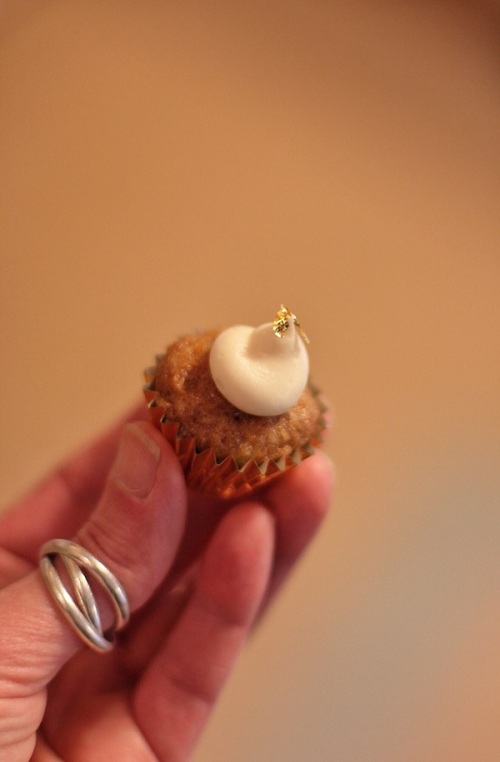 8 ounces crushed pineapple, including the juice

2 cups finely shredded carrots, about 3-4 depending on size

Mix together the oil, sugar, eggs, pineapple, coconut, carrots and nuts (if using). Make sure to break up any lumps. Stir in the flour, bs, salt, and cinnamon making sure the wet and dry ingredients are thoroughly combined. Spoon the batter into the cupcake liners so that you are just shy of the edge of the liner. Bake 17 minutes or until a toothpick in the center of the cupcake comes out clean. Cool for a few minutes in the pan, then remove to a cooling rack to cool completely.

While the cupcakes are cooling I make the frosting. I use a variation on my cream cheese frosting recipe. You may need more or less confectioners sugar depending on the weather in your part of the world. Right now it is fairly nippy and I want this frosting to almost melt in your mouth when you pop the cupcake in, so I’ve made mine on the soft side. Plus I use just a tiny dab so it doesn’t need to be quite as stiff as it is when you pipe it and want it to hold its shape.

Glittering church elements, golden voices, inspiring sunrises, and cupcakes kissed with gold leaf. Who is rich? I am.

Cream the butter and cream cheese together. Sprinkle in part of the powdered sugar. A stand mixer somehow gets the nicest results for me. Of course if you’ve been hitting the gym, I am sure you can accomplish the same with a whisk and your biceps. Add the vanilla, whipping a bit more and then take a swipe on your finger to judge the consistency. Pop it all into a disposable pastry bag or a zip lock freezer bag. If you have an 803 tip (1/4″ across) use that, or just cut a small hole in the tip of the bag. Remember you can always cut the hole bigger, but you can’t cut it smaller. Pipe a small dollop on each cupcake, working a dozen or two at a time. Then while the frosting is fresh apply a small bit of the gold leaf to each cupcake. Repeat until all the cupcakes are frosted.

This recipe makes 8 dozen give or take (and depending on if you lick the bowl or not). There does seem to be some variation in mini cupcake tins so you may need to adjust your baking time a bit and your final yield may be slightly different.

I bought my first package of edible gold leaf from Sur La Table (4 sheets for $26), though they don’t seem to carry it any more. You can also try here or here, just keep in mind that it is gold and you don’t need very much, at least not for cupcakes. The edible gold leaf also lasts for years if you keep it cool, dry, and out of the light. I apply it with a tiny dry brush I have in my food styling kit. A word of caution – gold leaf is one of the most static-y substances I have ever encountered so be very careful as you work with it. Try not to touch it with your fingers since you will get way more than you really want, and the gold leaf will prefer to wrap onto your finger rather than transfer to the frosting. For full disclosure the gold leaf I use is 23 Karat, not 24 Karat, but the later sounds so much better…

All photos by Cynthia Allen except for Le Vent du Nord which is by Jens Th from the Tønder Festival. You can see more of Jens Th photos of Le Vent du Nord by going to his site and searching through his music galleries.