Sometimes things don’t have to be complicated.

Like chores. With our youngest going to college locally this semester household chores somehow got into a boondoggle. Then came the chore wheel and the quagmire of who was supposed to do what evaporated as the house settled into a clean (or as clean as we get) routine. I got a chuckle when I realized that every time MOM (i.e. me) was on dump duty or bathroom cleaning I was WOW. I love the fact that being upside down makes me wow!

Another thing that isn’t too complicated is getting our dog Oliver to come back into the house after chasing bunny rabbits. Just open the back door and yell, “Steak” and he comes dashing. It works because he is a very clever Jack Russell Terrier, who has a formidable understanding of the english language. So much so that we’ve gotten into the habit of spelling, rather than saying, certain words. A friend cautioned us against making him food-centric, but I’ve found it very helpful over the years, especially owning a breed of dog who thinks about whether or not he wants to obey. Plus it costs us nothing. I simply cut up the scraps leftover from any meat dinner we have and pop those morsels into a bag we store in the freezer. Oliver knows he’ll get a frozen tidbit if he comes running at the “S” word.

This week I was tickled to come across the most un-complicated cake ever. One of those oh so simple recipes that I somehow missed when Marian Burros first published it in the NYT thirty plus years ago, but which thankfully circled around and around, ultimately finding me again through a news feed. If you have the ingredients on hand you can pop it into the oven in less than ten minutes. An hour later you have the perfect Friday afternoon plum tea cake. Which can then morph into Saturday morning breakfast before you head out to the Farmer’s Market. Or turn into a late night snack as you finish your homework. 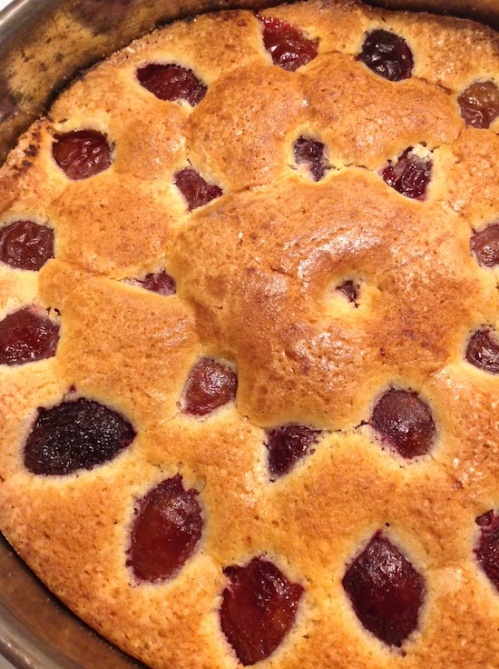 END_OF_DOCUMENT_TOKEN_TO_BE_REPLACED

The Cape of Shame

Today is day three of a forty-five day quarantine.* It looks like it will be a long month and a half. 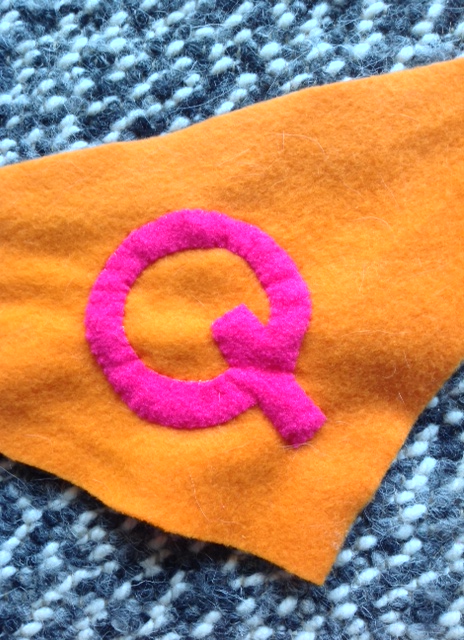 Mother’s Day was beautiful – 70s, sunny, enough breeze to keep away the bugs. I was enjoying myself sitting out on the deck for the first time this season and painting. Someone let the dog out so he could enjoy it too. We all, humans and animals alike, have had a serious case of cabin fever after such a relentless winter. Then – zoooom – the dog launched himself off the deck to go chase something furry. What can I say? He’s a terrier.

I kept on painting and sipping my wine until his barks switched from “I’m the boss and you’re in my yard” to “I’m in trouble, but that doesn’t matter cause I’m still going to get you”, punctuated with yelps of pain. We all dashed down and found our Jack Russell Terrier had taken on a raccoon. There was a lot of racing under and around the wood piles, with lots of barking and growling. We couldn’t really reach them, and even if we could have, no one wanted to get between the two combatants. Finally my husband managed to separate them after Oliver had grabbed the raccoon by the back of its neck and given him a vicious shake. I took off my work shirt and wrapped the dog with it since he was covered with dirt and blood and who knows what. He was also crazy out of his little walnut sized brain with the excitement of the hunt.

Shawn came up to the house to bathe Oliver while I called our town’s animal control officer. By the time the ACO arrived Oliver was ready for round two and the raccoon had crawled back under the wood pile. The officer decided not to dispatch the raccoon in part because he didn’t have a clear shot and in part because he felt the raccoon wasn’t acting all that strangely. We knew we’d have to get Oliver a rabies vaccine booster and figured that was that. Our Mother’s Day dinner would be a little late, but we’d all move on.

Turns out it’s not that simple. Yes, if your pet is up to date on their shots, they do need a booster, but they also get put under house arrest/quarantine for 45 days. In the house, with only short leashed walks (by an adult), for a month and a half. Did I mention we have a Jack Russell Terrier?

Also because my husband and I had both touched Oliver we too needed to get rabies shots.  A lot of them. Starting with five given at the ER, followed by several more at our doctor’s office over the next three weeks. It is a serious pain in the ass, and I mean that literally since that is where many of the initial shots go. As my sister said via text:

So I made Oliver a cape of shame. His very own necktie with a hot pink Q on it for quarantine. Think The Scarlet Letter meets Wishbone. My god-daughter suggested the orange and pink color combination after a favorite pair of sandals she had last summer. I hope Oliver likes wearing it for the next few weeks.

After my Easter disaster and now the Mother’s Day debacle the nurses at our local ER cannot wait to see what I do for Memorial Day.

*From some of the emails I received I realize I need to clarify that the 45 day quarantine is for the dog, not my husband or myself. Though if we start foaming at the mouth and acting all crazy I believe we will get our own special quarantine in a hospital somewhere.

A Dog and his Bone

A number of years ago I wrote a small piece for FamilyFun magazine on how to make a dog bone wreath. It was pretty simple – cover a wreath shaped piece of cardboard in foil, tie on dog bones and voila a simple pet present. The photo stylist got a bit wild and ended up adding real greenery to the wreath as well as tying on dog toys which both made it more complicated and more expensive. To me the original idea seemed the easiest and best and the one I go back to again and again.

There are four ways to do this project. The first it to buy pre-made dog bones and cover cardboard wreath shapes with foil which you then tie the bones onto. The second and third options are to make your own dog bones, which gives them a home-made appeal, then either tie medium size bones onto the foil covered wreaths or slip larger bones into those tiny stockings you can buy at craft stores around the holidays (I tend to buy as many as I can find after Christmas for the following year when they go on sale in January). The fourth possibility is to decorate a real wreath with dog bones, though that can get pricy and prickly (depending on the evergreens you use). 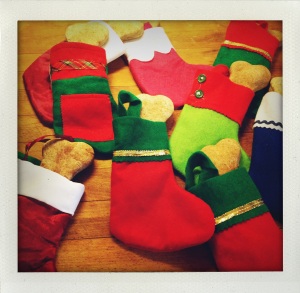 For years my kids went for the second and third options. They would mix up homemade dog bones, tie them with saved ribbons from Christmases past onto foil-covered cardboard wreaths or slip the bones into miniature stockings and sell them to our neighbors, almost all of whom either have a dog or two or know someone who owns one. Isabelle and Russell were smart, taking scraps they baked as “samples” to each house so the canine inhabitants could taste test the bones before their owners pulled out their wallets.

Cutting out home made dog bones

We make these with bacon fat which we save each time we fry up some bacon. It seems to last indefinitely in the freezer, though if you don’t eat bacon you can always substitute vegetable oil, but I think part of their appeal to canines is the bacon fat. Our family eats nitrate free bacon, which is another selling point to our neighbors who are picky about what their dogs consume, even if their dogs couldn’t care less.

This year I’m passing on the recipe to my brother’s kids who can carry on the tradition. My two nephews have decided their little six-year-old sister will be their “secret weapon,” the charmer whom no one will be able to say no to. Personally I think she might be the brains behind the whole operation after I overheard her tell her dad, “We need to make sure the Smith’s dog gets one.” My brother hesitated, I’m sure thinking Great-we don’t have a dog and we’ll end up buying the entire inventory when his daughter concluded, “Of course they’ll have to pay for it.” 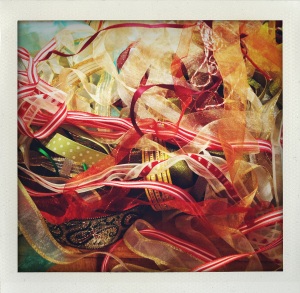 Preheat oven to 350ºF. Mix flour and crumbled beef bouillon with egg and water. Add the bacon fat or vegetable oil and need. Roll out to 1/2″ thickness and cut with dog bone shaped cookie cutters. Place on parchment or foil covered cookie pans and bake 23-30 minutes depending on size. Flip the bones over half way through baking and bake an additional 22-30 minutes. Cool and then use to decorate wreaths or stockings.

Note: These dog bones have no preservatives and so will not last much longer than a few weeks. Our dog Oliver loves these so much he will eat them as quickly as we will give them to him so it has never been a problem for us, but don’t plan on keeping them the same amount of time you’d keep store-bought dog bones.