Last Friday there were five more candles on my birthday cake than there were when I started this blog. Yup, it’s that time of year. Time to sing the song, put on the birthday hat, and celebrate. Which all happened after a day of zooming back and forth across the state.

Since Isabelle needed to pop over to Hanscom Air Force base to tie up some AFROTC stuff the celebratory birthday eating began at Sofra in Cambridge with their Turkish style breakfast and a pistachio pop-tart. Ana Sorten’s flavor combinations are truly five-star. If you ever are in the greater Boston area I would highly recommend you make time for a detour to check it out. Of course if I, like my sister, lived a few miles from Sofra’s front door I might stop cooking all together. 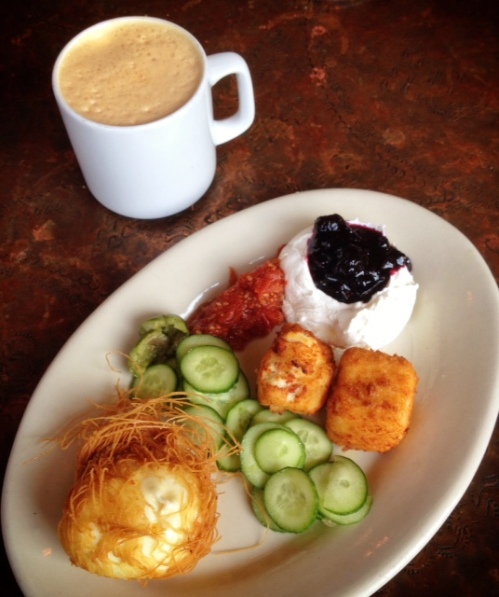 On our drive back to western side of the state Isabelle asked what I wanted for my birthday dessert, since it’s a tradition in our family that the birthday gal or guy gets to choose the meal and dessert*. Jokingly I told her I wanted, “all the deserts associated with Massachusetts – Boston Cream Pie, chocolate chip cookies, and Indian Pudding.” It wasn’t clear who was going to make the birthday dessert(s) but I knew that somehow there would be something sweet to fill the bill. Honestly I would have been happy to make my own cake/dessert since being in the kitchen is so relaxing; I just didn’t have the time.

When everyone had reconvene back at the house in the early evening we popped over the bridge to the Blue Heron Restaurant for cocktails and hors d’oeuvre. Shawn had a fabu dinner planned at home for later, but I wanted a little bit of an adult beverage sparkle as well as a few foods I was unlikely to cook at home. Their hand cut french fries with homemade truffle mayo are swoon-worthy, as are their chickpea coated fried calamari.

With my birthday bookended by visits to two of my favorite eateries, followed by hubby grilling up some lamby chops, it was a pretty sweet day in the food department. The proverbial cherry on top was Isabelle directing Russell (via text) to stop by Paul & Elizabeth’s restaurant to pick up a few servings of their Indian Pudding. My 55th birthday was complete. 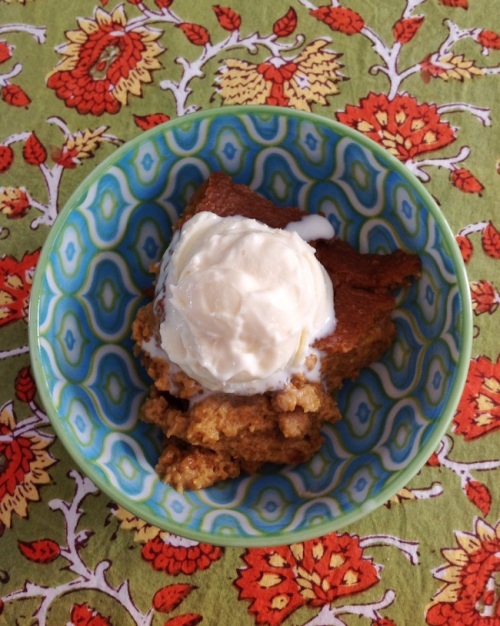 If you didn’t grow up in New England, or spend some time here, it is likely that you have no idea what Indian Pudding is. Basically it is a smash-up of old world meets new world. A variation on the hasty puddings of the Pilgrims, but substituting the ground cornmeal of the Native Americans for the wheat of the old world. Having grown up in New York state (which has much more in common culturally with the New England states than it does with the mid Atlantic states in my opinion), then attended college and ultimately settled in the Bay State, I know all about Indian Pudding. It also happens to be one of my Dad’s favorite desserts. And as far as I am concerned, it should have been acknowledged as one of the official foods of Massachusetts, but we’ll talk more about that later.** 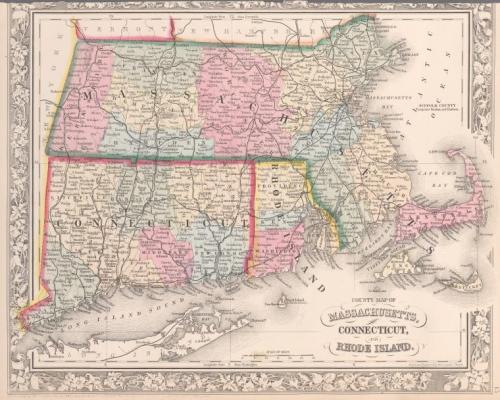 Much as I love Indian Pudding I have to be honest and tell those of you have never eaten it – Indian Pudding is butt ugly. Right up there with pet food. If you can get past the visual ugliness it is a yummy dessert. I can pretty much guarantee if you are served a bowl of warm Indian Pudding, with a scoop of vanilla ice cream melting on top, your eyelids will flutter as you murmur, “Mmmmmm.” Do your deserts need to be pretty? Make a Boston Cream Pie. If you’re okay with a homely-but-soul-satisfyingly-delicious-on-a-cold-winter-day-dessert than whip up a vat of Indian Pudding, the dish not even a food stylist can make look glamorous.

I started making Indian Pudding when I taught a cooking section for Isabelle’s third grade class on the Foods of Massachusetts. Third grade is the year our state determined all kids in public schools should learn about everything Massachusetts, from its history and geography, to its Peoples (Wampanoags/Puritans/Pilgrims) and products. Me being me I thought those eight and nine-year-olds should also learn about the official and unofficial foods of Massachusetts. So I wrote up a curriculum, which her teacher Pat Bell approved and was in the room, whisk recipes in hand, for a semester. 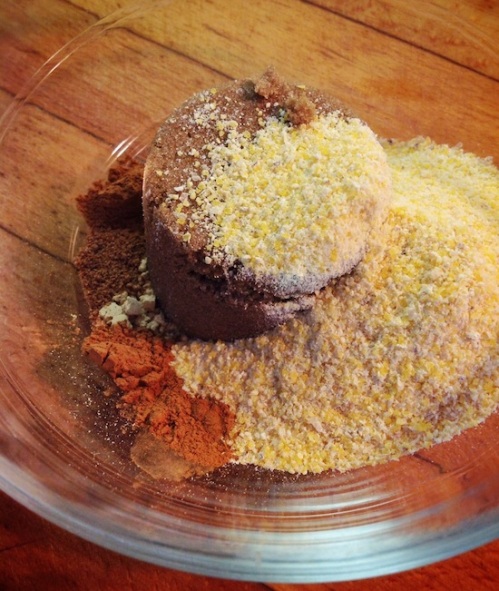 When I started making this dessert I tweaked the Deerfield Inn’s version. Lately though a thicker, slightly less sweet version, which I adapted from the New York Times has appealed to my taste. When I had my knitting group act as taste testers this week they voted for the thicker, less sweet version, saying, “If you want it sweeter the ice cream does the trick. Or you could drizzle it with maple syrup…” So this is a pretty flexible recipe and can be adjusted to your tastes.

I made this two times – once with cow’s milk and another time with goat’s milk, both full fat. There did not seem to be a difference from the type of dairy used, which was great since a number of my family and friends prefer goat’s milk. 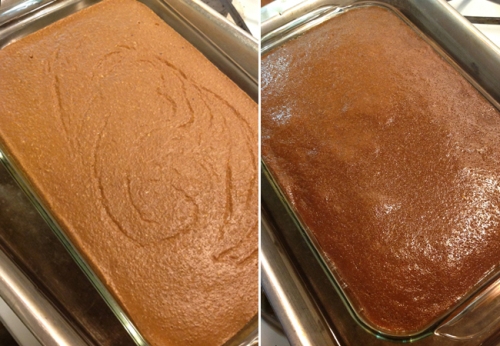 I also used Bob’s Red Mill Organic Stone Ground Cornmeal, which has a really nice flavor, is probably pretty similar to what the early settlers used, and is gluten-free (which the settler’s probably didn’t give a hoot about but several of my friends do). In the past I’ve also used Gray’s Johnnycake Corn Meal which is made entirely from Rhode Island Narragansett flint corn, and is grown on the southern coast of Rhode Island. It’s has superb flavor too, and is decidedly a New England product.

Preheat the oven to 350ºF and grease a 2 quart baking dish with the butter. Also put a kettle on so you have enough hot water to make a ban marie.

Heat milk until steaming, then slowly whisk in the cornmeal, spices, brown sugar, and molasses. Cook until thickened, which if you use the full cup of cornmeal should take about 10 minutes (if you use less cornmeal it can take a bit longer). You’ll want to keep whisking during this time so there isn’t any scorching.

Meanwhile crack the eggs into a bowl. Take a cup of the hot mixture and whisk it into the eggs. At this point you can turn off the heat. The hot milk-cornmeal tempers the eggs enough so when you pour them into the milk mixture you don’t end up with scrambled eggs. Once everything has been whisked together pour into the prepared pan.

You’ll want to set the baking dish into a bigger baking dish or roasting pan and place partway into the oven (far enough in so it doesn’t tip out). Then gently pour the hot water from the kettle into the larger dish until you’ve reached about half way up the side of your baking dish with the Indian Pudding in it. Slide it fully onto the rack in your oven and bake for 45 – 55 minutes or until set. If you use the lesser amount of cornmeal you may need to increase your baking time considerably. You want there to be just a very slight jiggle in the center of the dish when you take it out.

Serve warm with ice cream (or whipped cream). It is also nice with just a splash of milk. If you want to gild the lily you can drizzle some maple syrup on top. 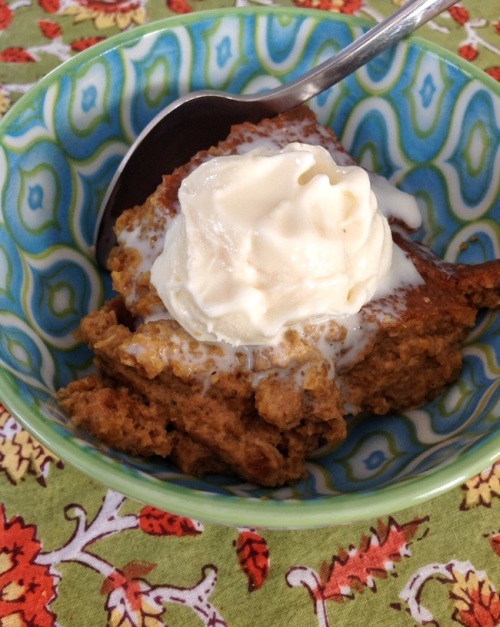 **I hope that within the next few weeks I’ll have a new project up and running. Hint – it will be like taking a bite out of Massachusetts. Stay tuned!

All by Cynthia Allen except for the map of Massachusetts, Connecticut and Rhode Island, which is courtesy of the New York Public Library Digital Collection. 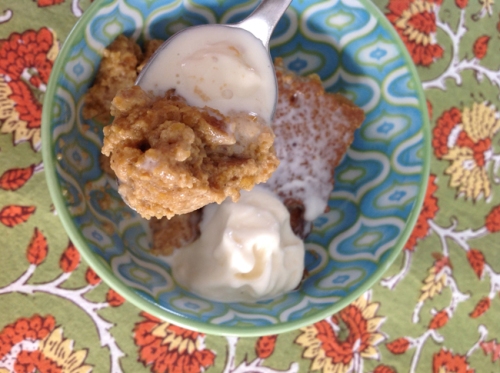