When to Borrow vs. When to Buy 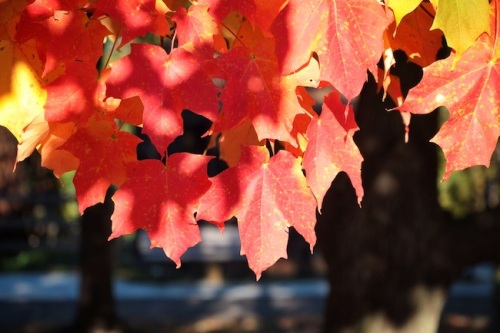 This year we have had the quintessential fall. Bright reds ranging from deep burgundy to jammy crimsons, flaming oranges, and amber yellows. A few weeks ago our first frost mellowed the hillsides into a more subdued, yet equally glorious, pallete. Truthfully it has felt a little surreal to be experiencing such a picture-perfect autumn. Often during this season I whine, wishing the colors were just a bit more intense and the leaves lasted just a little bit longer on the trees. However I have no complaints for 2015 – this fall has been perfect.

While I have been revelling in the colors there is also a bittersweet edge to the season. November heralds – at least in Massachusetts – the end of the local farmers markets. Golonka’s, my neighborhood farmstand, closed up for the season last Saturday. Each week at the various farmers markets I visit there are less venders, and the colors of available produce are, like the season, becoming more muted. Still, there are delicious ingredients to fill my baskets with so I just throw on a scarf and sweater then venture out to see what is being offered.

About a month ago I was in Hudson, New York END_OF_DOCUMENT_TOKEN_TO_BE_REPLACED

A Squash of One’s Own

I am a big fan of squash. Any squash. Butternut, Delicata, Blue Hubbard, and Acorn. Bring ’em on (though for some of those bigger squash you may need a chain saw to cut into them)! To me these hard squashes say fall, New England, feasting. When the leaves are down and you finally decide you have to turn the heat on (we made it to October 27th before flipping the switch this year); about the time you dig into your bottom drawer for your sweaters; but before the first snowflakes hit, is the perfect time to celebrate the change of seasons with squash.

For me this recipe is akin to a cooking meditation. You chop and peel and stir as you sip a mug of hot apple cider or a glass of wine and hear about everyone’s day. The timing can be loose and the recipe (even though I’ve written it down for you) is flexible, more of a concept than something to follow to the letter. It’s the food version of one-size-fits-all, and you can tweak it and adapt it to your taste, as well as to what happens to be on your pantry shelves that day.

I’ve made it dozens of times over the years and while it’s wonderful every time, it hasn’t been the same twice. I’ve used sweet pork sausage, but also chicken apple sausage, garlic sausage, and one time a spicy chorizo. When vegetarians are coming to dinner I substitute tempeh for the sausage and vegetable stock or apple cider for the chicken broth. The last few incarnations have had dried cherries mixed with chunks of crisp fall apples, though previous iterations of this dish have contained silvered apricots, dried apples, dried and/or fresh cranberries, pears, and golden raisins.

Nan, the woman who told me about this recipe was a huge fan of the Neville Brothers so I often find myself playing one of their CDs as I putter around the kitchen. When I told her I’d never heard of the Neville Brothers she described them like this, “They have the voices of angels – angels who sing rhythm & blues and funk and come from New Orleans.”

3-4  sausages or equivalent amount of tempeh

Butter or olive oil (if desired)

While the squash are baking make the stuffing. Sauté onions, carrots, celery together 5-8 minutes depending on the size of your chopped pieces. If your sausage is pre-cooked dice up and add to the vegetable mixture. For the vegetarian version chop up tempeh and sauté until lightly browned. If you’re using raw sausage cook with vegetables until all pink is gone from the meat. While all this sautéing is going on heat up the stock until simmering.

At this  point the squash should be cooked. Flip over, add a pat of butter or margarine or small spoonful of olive oil  (if desired) and a light sprinkle of salt and pepper to the squash. If your squash won’t sit level slice off a tiny piece from the bottom so they won’t rock. Mound in the stuffing so it is slightly domed. Repeat with all squash halves. You should have a fair amount of stuffing left over. Place the remaining stuffing in a shallow baking dish or pie plate.

Bake stuffed squash and extra stuffing for 15-20 minutes or until the top of the stuffing starts to lightly brown and crisp. If the stuffing in the baking dish is getting too dry cover with foil. The last bit of baking time gives you time to clean up so there won’t be a mountain of pots and pans to attack after dinner. I admit I derive some OCD satisfaction from the fact that this meal comes out of the oven already portioned out (let’s not go into what that says about me). Sometimes it’s important to have a squash of one’s own.

Serve squash with a side of stuffing. 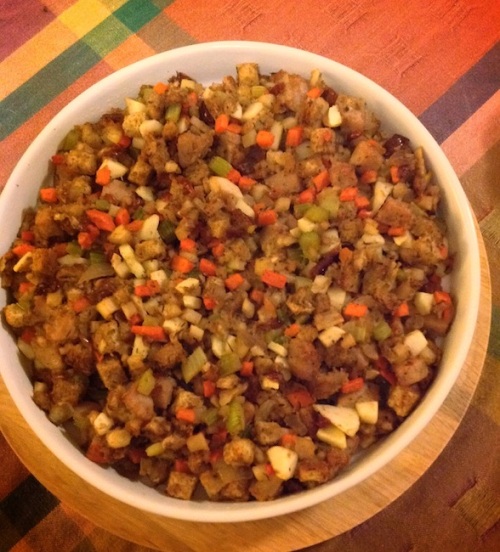 Because there is no such thing as enough stuffing…